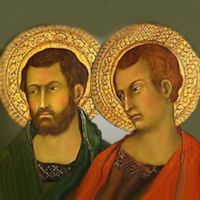 St. Timothy, born in Galatia in Asia Minor, was baptized and later ordained to the priesthood by St. Paul. The young Galatian became Paul's missionary companion and his most beloved spiritual son. St. Paul showed his trust in this disciple by consecrating him bishop of the great city of Ephesus. St. Timothy was stoned to death thirty years after St. Paul's martyrdom for having denounced the worship of the goddess Diana. In the 1962 Missal, St. Timothy's feast is celebrated on January 24 and the feast of St. Titus is on February 6.

St. Titus, a convert from paganism, was a fellow laborer of St. Paul on many apostolic missions. St. Paul later made him bishop of Crete, a difficult charge because of the character of the inhabitants and the spread of erroneous doctrines on that island. St. Paul's writings tell us that St. Titus rejoiced to discover what was good in others and drew the hearts of men by his wide and affectionate sympathy.

Today is also the feast of St. Jose Gabriel del Rosario Brochero, a Roman Catholic Argentinian priest who suffered leprosy throughout his life. He is known for his extensive work with the poor and the sick. He became affectionately known as "the Gaucho priest" and the "cowboy priest." Pope Francis canonized Saint Brochero in 2016.

According to the previous liturgical calendar (1962), today is the feast of St. Polycarp, which is now celebrated on February 23.

Timothy was Paul's dearest disciple, his most steadfast associate. He was converted during the apostle's first missionary journey. When Paul revisited Lystra, Timothy, though still very young (about twenty) joined him as a co-worker and companion. Thereafter, there existed between them a most intimate bond, as between father and son. St. Paul calls him his beloved child, devoted to him "like a son to his father" (Phil. 2:22). Of a kindly disposition, unselfish, prudent, zealous, he was a great consolation to Paul, particularly in the sufferings of his later years. He also assisted the apostle in the establishment of all the major Christian communities and was entrusted with missions of highest importance. Timothy was with Paul during his first Roman imprisonment. Paul made his self-sacrificing companion bishop of Ephesus, but the finest monument left him by his master are the two canonical Epistles bearing his name.

— Excerpted from The Church's Year of Grace, Pius Parsch

St. Titus, a pagan by birth, became one of St. Paul's most illustrious disciples. He accompanied the apostle on several of his missionary journeys and was entrusted with important missions. Finally he came with St. Paul to the island of Crete, where he was appointed bishop. He performed this duty in accordance with the admonition given him, ". . . in all things show yourself an example of good works" (Tit. 2:7).

Tradition tells us that he died a natural death at the age of 94, having lived in the state of virginity during his whole life. St. Paul left a worthy monument to Titus, his faithful disciple, in the beautiful pastoral letter which forms part of the New Testament. Today's feast in his honor was introduced in 1854.

— Excerpted from The Church's Year of Grace, Pius Parsch