Pope invites prayers ahead of his visit to Congo (DRC)

Pope urges prayers for DR Congo ahead of Apostolic Visit

Pope Francis invites the faithful to pray for the Democratic Republic of Congo, as parts of the Central African nation endure violence ahead of his Apostolic Journey to the country later this month.

Greeting the faithful at the end of his General Audience on Wednesday, Pope Francis welcomed a group of pilgrims from the Democratic Republic of Congo.

The Pope recalled that he will be visiting at the end of the month, from 31 January to 3 February, and invited everyone to pray for the nation.

“Let us ask God to give us a pastoral heart that suffers and takes risks in order to bear witness. It is not only an honour but also a duty to bring the Word of God to those who have been entrusted to us and to those whom we encounter in our daily lives.” 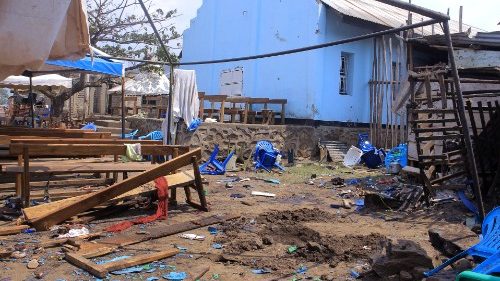 A day earlier, on Tuesday, Pope Francis expressed his grief for a terrorist bombing that took place in the DRC.

In the attack on Sunday, suspected terrorists attacked a Pentecostal church in the eastern city of Kasindi.

Hundreds of worshipers had gathered to welcome new members to the community in baptism. A blast rocked the church’s courtyard, killing at least 14 people and wounding more than 40 others.

In a telegram of condolences addressed to Rev. André Bokundoa-Bo-Likabe, President of the Church of Christ in Congo, the Pope said he was “saddened to learn of the attack on a Pentecostal church in Kasindi, which caused the death of innocent people."

He also expressed his “compassion and closeness to all the families affected by the tragedy.”

Posted by Deacon Mike Talbot at 8:43 AM