News from St. Joseph Seminary College on the Northshore of New Orleans 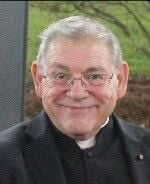 Monsignor Bruce Miller has been appointed academic dean at Saint Joseph Seminary College in St. Benedict. He has been a professor of theological studies and a spiritual advisor at the seminary college since 2021 following his retirement from active ministry with the Diocese of Alexandria

"This challenging position will allow me to have an active retirement serving future leaders of the church without ultimate institutional responsibility,” Miller said. “Please keep the seminarians in your prayers as we seek to discern God's will with them."

The Alexandria native was ordained as a priest in 1977 for the Diocese of Alexandria-Shreveport and nominated monsignor in 2019. He began his ministry with Immaculate Conception Church in Natchitoches, then served in several diocesan director roles before being assigned to study canon law in 1984. When he returned in 1986, he became judicial vicar for the new Diocese of Alexandria and also served as pastor of several churches until 2007, when he became pastor of Sacred Heart Catholic Church in Pineville. He retired as priest of Sacred Heart in 2020 and was named pastor emeritus. In 2018, he was named judicial vicar emeritus and served as judge for the diocese from 2018 until 2020.

Miller has been a presenter on canon law at a number of seminars and events and has also been published in a number of canon law publications. He served as president of the Canon Law Society of America in 2016-17 and remains active with several CLSA committees.

Posted by Deacon Mike Talbot at 10:32 AM