From Germany to New York to Hawaii; Saint for Monday 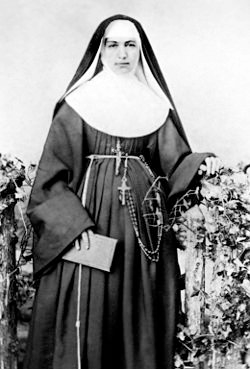 Saint Marianne Cope, O.S.F. is also known as Saint Marianne of Moloka'i. She was born in Germany on January 23, 1838 and spent much of her life working in Hawai'i working with lepers on the island of Moloka'i.

Cope was born on January 23, 1838 in Heppenheim, in what was then the Grand Duchy of Hesse. Today, that region is part of Germany. She was baptized Maria Anna Barbara Koob, which was later changed to Cope.

Just a year after her birth, her family emigrated to the United States, settling in Utica. New York. Cope attended a parish school until she reached the eighth grade. By that time, her father had become an invalid and she went to work in a factory to support the family.

Her father died in 1862, and this along with her siblings maturity, permitted her to leave the factory to pursue a religious life. She became a novitiate of the Sisters of the Third Order Regular of Saint Francis based in Syracuse, New York. She took the name Marianne when she completed her formation.

German-speaking immigrants settled in large numbers in her area of New York state, so she became a teacher and later a principal at a school for immigrant children.

Cope also helped direct the opening of the first two Catholic hospitals in central New York. She arranged for students from the Geneva Medical College in New York to work at the hospital, but also stipulated that patients should be able to refuse treatment by them. It was one of the first times in history that the right of a patient to refuse treatment was recognized.

By 1883, Cope had become the Superior General of her congregation. It was at this time she received a plea for help from leprosy sufferers in Hawaii. King Kalakaua himself sent the letter asking for aid in treating patients who were isolated on the island of Moloka'i. The King had already been declined by more than 50 other religious institutes.

Mother Marianne, as she was then known, left Syracuse with six sisters to attend to the sick, and arrived on November 8,1883.

Once arrived, Mother Marianne managed a hospital on the island of O'ahu, where victims of leprosy were sent for triage. The most severe patients were sent to the island of Moloka'i.

The next year, Mother Marianne helped establish the Malulani hospital on the island of Maui.

Her tenure at Malulani hospital did not last as she was soon called back to O'ahu to deal with claims of abuse from the government-appointed administrator there. Upon arrival and following an initial investigation, Mother Marianne demanded that he resign or she would leave. The government dismissed the administrator and gave her full management of the hospital there.

Eventually, Mother Marianne's work became a burden on her frail body and she was confined to a wheelchair. Despite this limitation, she continued to work tirelessly. Many noticed that despite all her years of work she never contracted leprosy herself, which many regarded as a miracle in itself.

Mother Marianne passed away on August 9, 1918 and was buried at Bishop Home.

In the years following her death, several miracles were reported in her name. In 1993, a woman was miraculously cured after multiple organ failure following prayers to Mother Marianne. The woman's subsequent recovery was certified by the Church and Mother Marianne was beatified by Pope Benedict XVI on May 14, 2005.

After her beatification, Mother Marianne's remains were moved to Syracuse, New York and placed in a shrine.

On December 6, 2011, an additional miracle was credited to her and approved by Benedict.

On October 21, 2012, she was officially canonized by Benedict.