Buffalo Bill safety Damar Hamlin and our collective instinct to pray, and pray some more

How Damar Hamlin Drove a Nation to Pray

When the Buffalo Bills safety fell, there was, for many, only one rational response. 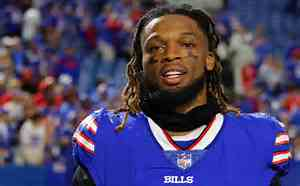 The U.S. Supreme Court ruled in June that a Bremerton, Wash., high-school football coach was improperly fired for praying with his players after games. That was only the most recent of high court cases involving the question of when prayer on public grounds is and isn’t permissible. Americans, especially American liberals, have been obsessed with the question for more than 60 years.

The idea that prayer is improper at big-time sporting events was forgotten on Monday night. It happened nine minutes into the game between the Buffalo Bills and the Cincinnati Bengals. Bills safety Damar Hamlin, after a routine tackle, stood up and then collapsed. Minutes later, emergency medical staff delivered cardiopulmonary resuscitation. The game was suspended, and suddenly prayer was back on the list of things anybody could talk about or do on camera.

Paycor Stadium, where the Bengals play, is owned by Hamilton County; it’s public property. But no one, so far as I am aware, raised any objection to the midfield prayers offered up on Monday night. That is because the fall of Damar Hamlin demanded a religious response. The ominous way in which the lithe 24-year-old dropped to the turf—not slumping down but falling backward—visibly shocked nearby players and appalled viewers. It took very little time to realize that finishing the game was out of the question. “Football is entertainment,” remarked the normally loquacious commentator Booger McFarland with sober concision. “I don’t think anyone is concerned with entertainment tonight.”

Any legal or cultural prohibitions attaching to sporting-event prayers were, for the moment, rescinded. Players knelt, many plainly in prayer. Commentators, rightly sensing the need to go beyond conventional references to “thoughts,” spoke repeatedly of “prayers.” A Bengals fan held up a hastily made placard bearing the words “Pray for Buffalo #3 Hamlin.” Fans from both teams gathered outside the University of Cincinnati Medical Center, to which Mr. Hamlin had been taken, and collectively prayed for the young man.

Suddenly prayer—the ancient activity of speaking to God in the belief that he can hear and respond—was everywhere. Top-level coaches and players, former and present, posted appeals to “Pray for Damar.” The NFL on Monday night issued a statement advising only that its “thoughts” were with Mr. Hamlin and his family. A day later the league changed its social-media avatar, together with those of all 32 professional teams, to an image of Mr. Hamlin’s No. 3 Bills jersey bearing the words “Pray for Damar.”

Former quarterback Dan Orlovsky, discussing the game with two panelists on ESPN, did the until-now unthinkable: He bowed his head and actually prayed—with two other commentators, reporter Laura Rutledge and former Dallas Cowboys defensive end Marcus Spears, bowing their heads in reverential accord. The prayer concluded, each said “Amen,” and you felt they meant it.

Those of a, let’s say, self-consciously enlightened disposition will quietly demur. They will consider the whole pray-for-Damar episode a mass expression of some irrational atavistic impulse. Fans of professional football, they will reason, are mostly petty-bourgeois suburbanites whose minds and emotions are captive to the exploded religious dogmas they learned as children. Let the fans “pray” if that’s what gives them comfort, but it changes nothing.

I don’t subscribe to that manner of thinking, but as a hardened Protestant with well-demarcated doctrinal commitments, I’m not entirely comfortable with so many ecumenical pleas for the favor of an undefined deity. Are all these thousands of social-media posters urging their followers to #PrayForDamar actually praying and, if they are, praying to the one true God? I’m not sure.

But forget all that. There is something natural and beautiful in the desire to entreat God to aid a gravely injured man, however that entreaty may be uttered. “Somehow I have always had an inner and unaccountable conviction that any religious expression of truth, however bizarre or uncouth, is more sufficing than any secular one, however elegant and intellectually brilliant,” wrote the great British journalist Malcolm Muggeridge. “Animistic savages prostrating themselves before a painted stone have always seemed to me to be nearer the truth than any Einstein or Bertrand Russell.”

News reports on Thursday indicate that Mr. Hamlin, against every expectation, is cognizant and able to communicate. Not everyone is surprised.