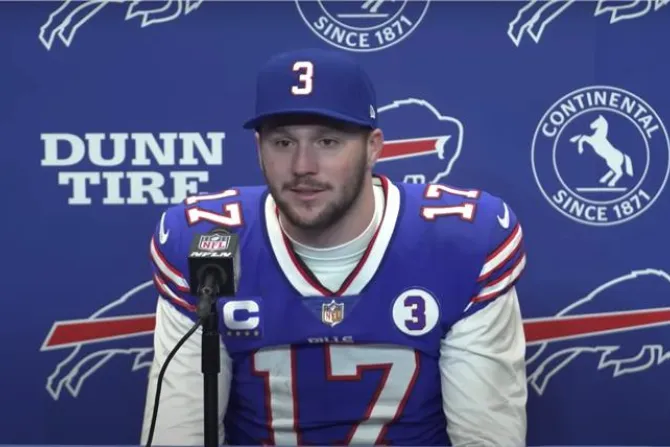 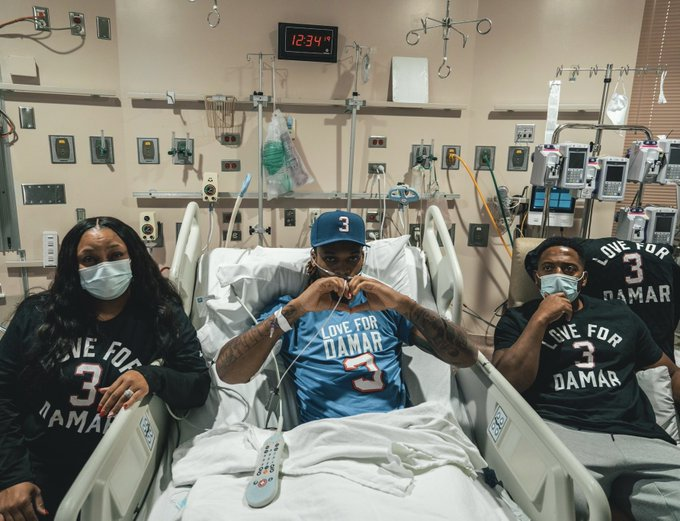 There’s been a lot of God talk around the professional sports world since NFL safety for the Buffalo Bills Damar Hamlin suffered cardiac arrest during a game last week.

After the Bills defeated the New England Patriots on Sunday in stunning fashion, excitement over the game was expressed in decidedly religious terms by Bills quarterback Josh Allen. No doubt the good news about Hamlin’s recovery, which some have called miraculous, helped cast the game in a heavenly light.

On the first play of the game, Bills kick-returner Nyheim Hines scored a 96-yard kick-return touchdown on the opening kickoff, causing the stadium to erupt in cheers.

Responding to questions about Hines’ touchdown after the game, Allen said: “You want the truth? It was spiritual. It really was. Bone-chilling. It was special.”

“I can’t remember a play that touched me like that, I don’t think in my life. So it’s probably No. 1,” he said.

“Like, you can’t draw that one up, write that one up any better,” he said.

Later in the third quarter, Hines returned another kick return for a 101-yard touchdown, giving the Bills a 21-17 lead over the Patriots. Hines became the first player since 2010 to score two kick-return touchdowns in the same game, according to ESPN. The Bills are ranked at the top of their division, the AFC East, with a 13-3 record after the 35-23 victory.

Hamlin was live-tweeting from the hospital during the game with excitement as he watched Hines break records:

Players, NFL teams, and fans drew attention to the number 3, Hamlin’s number, all weekend by drawing it on signs, buying his jersey, creating custom-made clothing, highlighting the number 3 on the 30-yard line, and showcasing it on stadium jumbotrons

In his postgame interview, Allen said that Kevin Kearns, the Bills’ director of communications, told him that “it’s been three years and three months since the last kickoff return [for the Bills]. So, it’s pretty cool.”

The number 3 showed up in more statistics, as CBS reporter Tracy Wolfson told Allen after the game that he threw three touchdown passes and that the Bills defense made three interceptions.

Wolfson said that 3 “is a pretty special number this week.”

Late in the first quarter of the Jan. 2 away game against the Cincinnati Bengals, Hamlin tackled opposing receiver Tee Higgins. Higgins led with his shoulder into Hamlin’s chest before being brought to the ground. In videos of the injury, Hamlin can be seen standing up after the tackle and then collapsing straight back.

In a statement Jan. 3, the Bills said that Hamlin suffered from cardiac arrest after the hit. His heartbeat was restored on the field and he was brought to the University of Cincinnati Medical Center in an ambulance, the Bills said.

Hamlin received CPR while on the field and was brought off on a stretcher, according to NFL.com. Hamlin was sedated and listed in critical condition, the statement said.

The game was suspended and canceled after the incident.

Hamlin posted a photo of himself in his hospital room making the sign of a heart with his hands before the 1 p.m. EST game on Sunday.

The Bills said on Jan. 6 that “per the physicians at [University of Cincinnati Medical Center], Damar’s breathing tube was removed overnight. He continues to progress remarkably in his recovery. His neurologic function remains intact and he has been able to talk to his family and care team.”

Posted by Deacon Mike Talbot at 11:36 AM