As Benedict XVI funeral awaits, will we soon see new rules for Pope's who resign or retire? 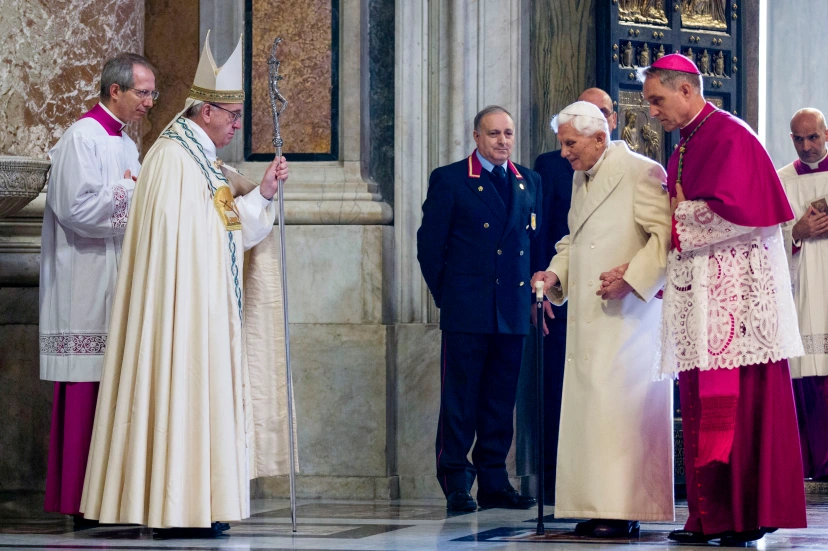 ROME – With the passing of Pope Benedict XVI, the question has been raised afresh as to whether Pope Francis will now issue new protocols for a pope who steps down from office, as many have speculated.

The anomaly of the whole idea of an “emeritus pope” has been clear for the past decade, and even the details of Benedict’s death and funeral arrangements are providing fresh reminders.

For one thing, there was no symbolic smashing of the “fisherman’s ring,” as Benedict’s was already destroyed when he became the first pope to resign the papacy in 600 years in 2013. No death bells tolled at his passing and no formal announcement was made by a Vatican official, although the Vatican’s regular bells, which usually toll every quarter of an hour, have been silent since Benedict’s passing at 9:34a.m. on New Year’s Eve.

Only around 60,000 people are expected to attend Benedict XVI’s funeral, compared to the 300,000 that attended the funeral of John Paul II in 2005, though an estimated 65,000 people paid their respects to Benedict Monday, his first day of laying in state in St. Peter’s Basilica, with Italian President Sergio Mattarella and Prime Minister Giorgia Meloni among the first to enter.

Benedict will lay in state for just three days, rather than the traditional 4-6 for a reigning pope, and only Germany and Italy have been invited to send official delegations for his Jan. 5 funeral, which will be presided over by Pope Francis.

Leaders of other countries have been advised that they are free to attend if they wish, but in a private, rather than official capacity.  So far, several have confirmed their informal attendance or announced plans to attend, including Queen Sofia and minister Félix Bolaños of Spain; King Philippe and Queen Mathilde of Belgium; Polish President Andrzej Duda; Lithuanian President Gitanas Nausėda; Portuguese President Marcelo Rebelo de Sousa; Bavaria governor Markus Soder; and Hungarian President Katalin Novak.

Since Benedict’s historic resignation in 2013, some experts have argued that clearer rules are needed for a retired pope to prevent any confusion on who is actually in charge, and to ensure there is no chance that the pope emeritus can interfere with the reign of his successor.

For instance, some canonists and experts have argued that the title Benedict chose, “pope emeritus,” was confusing, as was his choice to continue wearing the white cassock associated with the papacy and to be addressed as “His Holiness.”

Benedict XVI’s longtime personal secretary, German Archbishop Georg Gänswein, said in a recent interview with the Italian newspaper La Reppublica that Benedict himself chose to be called “pope emeritus” because “faced with a decision so exceptional, to return to cardinal would not have been natural.”

Gänswein insisted, however, that Benedict was always aware that “there was always only one pope, and he is called Francis.”

Benedict’s writings and public comments in retirement on issues such as clerical sexual abuse and priestly celibacy, as well as the Second Vatican Council, have frequently been spun as opposition to his predecessor or attempts to influence Pope Francis’s decision-making. Veteran Italian journalist Luigi Accattoli recently catalogued at least 30 such instances when Pope Benedict departed from his vow to remain “hidden from the world,” often at Pope Francis’s request.

Many so-called Catholic “traditionalists” have continued to make Benedict XVI their papal point of reference, refusing to recognize Francis’s authority. A common toast among traditionally-leaning clergy in Rome after Francis’s election, for example, was to “Benedict our pope, and Francis our bishop.”

While Pope Francis in the past has said that he believes additional protocols for the office of a retired pope are necessary, and that the status quo between he and his predecessor worked because Benedict was both “saintly and discreet,” in a more recent interview he said he had no plans to issue such protocols himself.

Speaking to ABC Español in mid-December, Francis was also asked whether he had any plans to issue a decree outlining the role of a pope emeritus.

In his response, Pope Francis said no, saying, “I didn’t change a thing, I didn’t even think about doing it,” adding that, “Perhaps the Holy Spirit has no interest in me worrying about those things.”

Now that Benedict XVI has passed, the question is whether or not Pope Francis will reconsider that position, or whether he plans to leave that to his own successor, as any issuance of new norms could be interpreted as critical of Benedict’s actions.

Beyond Francis’s own intentions, there’s also an active debate among canonists about whether it’s even possible for one pope to issue rules that would limit the choices of another. While Francis could issue rules now to govern his own situation, should he elect at some future point to retire, experts say the binding force of those measures would expire with his papacy.

Posted by Deacon Mike Talbot at 11:40 AM