Saint for Thursday in the Octave of Christmas 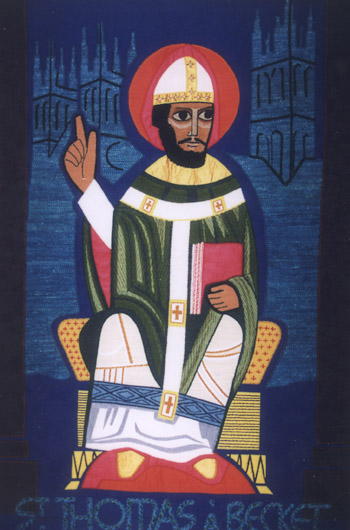 There is a romantic legend that the mother of Thomas Becket was a Saracen princess who followed his father, a pilgrim or crusader, back from the Holy Land, and wandered about Europe repeating the only English words she knew, "London" and "Becket," until she found him. There is no foundation for the story. According to a contemporary writer, Thomas Becket was the son of Gilbert Becket, sheriff of London; another relates that both parents were of Norman blood. Whatever his parentage, we know with certainty that the future chancellor and archbishop of Canterbury was born on St. Thomas day, 1118, of a good family, and that he was educated at a school of canons regular at Merton Priory in Sussex, and later at the University of Paris. When Thomas returned from France, his parents had died. Obliged to make his way unaided, he obtained an appointment as clerk to the sheriff's court, where he showed great ability. All accounts describe him as a strongly built, spirited youth, a lover of field sports, who seems to have spent his leisure time in hawking and hunting. One day when he was out hunting with his falcon, the bird swooped down at a duck, and as the duck dived, plunged after it into the river. Thomas himself leapt in to save the valuable hawk, and the rapid stream swept him along to a mill, where only the accidental stopping of the wheel saved his life. The episode serves to illustrate the impetuous daring which characterized Becket all through his life.