Pope at Angelus: Be creative and clever in doing good always

Pope Francis calls on the faithful to use creativity, prudence, and even cleverness, in living out the Gospel in our daily lives, and to be generous in using the goods of this world for those who need them most, showing fraternal love and social fellowship.

Speaking to pilgrims gathered in Saint Peter's Square for the Sunday Angelus, Pope Francis offered his weekly reflections on the Sunday Gospel, which recounts the parable Jesus told about the corrupt manager who squandered his master's property, but was discovered and set to be fired. The manager quickly and shrewdly found a way out of the situation to save himself. The Pope said understanding the point of this parable can be difficult at first, and we need to reflect on what lesson Jesus is giving us here. 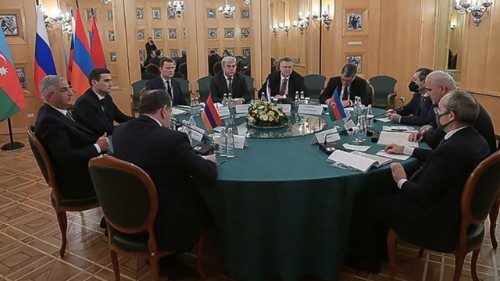 Pope prays for peace between Azerbaijan and Armenia

The Pope made some observations about the manager in this parable: first, that he does not resign himself to his fate or play the victim, but on the contrary, acts with shrewdness in finding a way out of his bind. The Pope noted Jesus' words, "The children of this age are more shrewd in dealing with their own generation than are the children of light," who sometimes are not as alert or are too naive, not knowing how to take the initiative to find ways out of difficulties. Cleverness and creativity can be used for good and on behalf of serving others, he pointed out, noting that Jesus shows that in following the Gospel, we need to be honest, awake, and attentive to discern reality and be creative to find good solutions for ourselves and others.

Another teaching the Lord gives us here is the importance of building up fraternal relations through generosity, sharing, and serving others with what we have. The Pope said that to inherit eternal life, "there is no need to accumulate goods in this world" and what matters is the love shown in our fraternal relations. The Pope said we are called to use the  material goods of the world charitably, not selfishly, so they benefit everyone, especially the weakest.

In conclusion, the Pope pointed out how today also we hear about stories of corruption, dishonest conduct, unfair policies, selfishness that dominates the choices of individuals and institutions, and many other murky situations. But he stressed that we Christians cannot allow ourselves to become discouraged, or worse, just ignore matters and remain indifferent.

“We are called to be creative in doing good with the prudence and the cleverness of the Gospel, using the goods of this world, not only material but all of the gifts we have received from the Lord, not to enrich ourselves, but to generate fraternal love and social fellowship. Let us pray to the Blessed Virgin Mary, that she may help us be like herself, poor in spirit and rich in works of charity for one another.”

Posted by Deacon Mike Talbot at 9:44 AM