“The Bread of Hope” is the name given to an initiative that sees prison inmates preparing the hosts for the XXVII National Eucharistic Congress that takes place in the southern Italian city of Matera from 22 to 25 September.

When Pope Francis celebrates the Eucharist in Matera on Sunday, the hosts that will become the Body of Christ will have been produced by prison inmates involved in an initiative called “The Bread of Hope.”

“Eucharistic workshops” have sprung up all over the world in which “the last” are the ones that produce what is destined to become the Body of Christ: in Buenos Aires by young people who have recovered from drug addiction, in Pompei and Bethlehem by disabled people, in Ethiopia by former street children, in Milan by single mothers with a difficult past, in Sri Lanka by young widows, in Barcelona, in Maputo and in various Italian cities by prison inmates and former detainees. 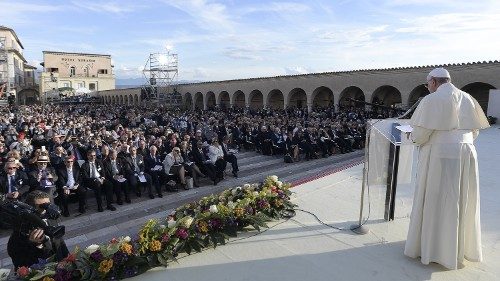 Pope to visit Assisi and Matera in September

Building on the Christian message that always promotes the dignity of the human person and upholds the union between Christ and the poor, an initiative involving inmates from prisons in Milan and Modena will result in the production of thirty-five thousand hosts to be used for the distribution of communion during the Eucharistic Celebration of the XXVII National Eucharistic Congress in Matera scheduled from 22 to 25 September. Pope Francis is scheduled to celebrate the closing Mass on the event.

The initiative is promoted by the Inspectorate of Prison Chaplains of Italy and comes to life thanks to the support of Foundations and Cooperatives that operate within detention facilities.

The Bread of Hope

“The Bread produced within the prison walls, and which will become the Body of Christ on the altar, intends to be a voice of Hope addressed to all the ecclesial communities and the civil world," says Don Raffaele Grimaldi, Inspector general of chaplains in Italian prisons.

It is a reminder, he explained, “so as not to forget that even in prisons there is a community in need of listening, welcome and redemption."

Don Grimaldi also expressed the hope that the Eucharistic Congress may help us to understand that “in that small piece of bread that nourishes our human frailty, besides being the Living Christ, the sorrows of humanity are enclosed and the faces of those who live in prisons are imprinted.”

The hosts that will feed the participants of the Eucharistic Congress also symbolize the inmates' spiritual sharing with their sisters and brothers who will participate in the great Liturgical Assembly of the Italian Church in Matera.

It is a significant gesture, Don Grimaldi says, that celebrates God's love and mercy and relaunches Prison Pastoral care.

“35,000 hosts will be prepared and kneaded by the hands of prisoners; the same hands with which, in the past, they have committed their crimes.”

He describes it as “A catechesis of reconciliation, conversion and awareness of the evil committed because nothing is impossible for God.”

It is a way, he adds, to promote restorative justice that also passes through the mediation of gestures of responsibility.

Don Grimaldi expressed gratitude to all the prison chaplains and volunteers who make prisons places of recovery and not “powder kegs of rage”.

He said that in this difficult time of economic and social crisis, penal institutions are most in need of outstretched hands, of women and men of goodwill who know how to heal the wounds, without prejudice and contempt of any kind towards those who are shrouded in the mantle of an existential prison.

"Let us return to the taste for service", he continued,  "bowing our heads and serving those who are in difficulty."

“The hosts produced by prisoners are the fruit of sharing the Church's synodal journey: an invitation to walk together to feel like one family and be in the same boat to face the storms of life.”

Posted by Deacon Mike Talbot at 9:57 AM