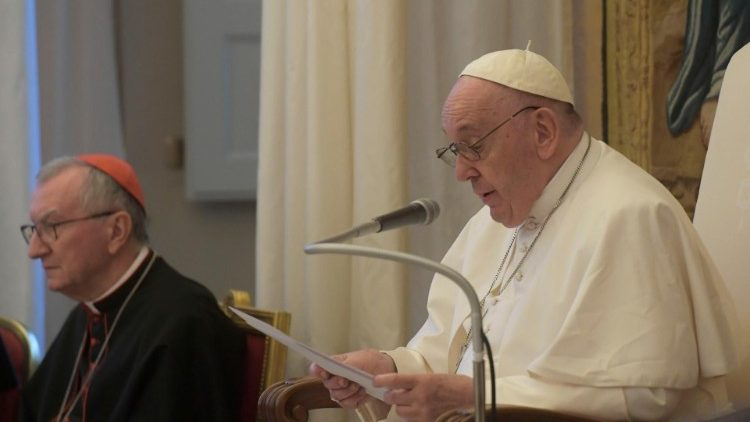 Pope Francis holds a triennial meeting with Pontifical Representatives in the Vatican, and calls attention to the Holy See’s efforts to seek peace amid a “third world war fought piecemeal”.

The Pope’s representatives in nations across the globe met with the Holy Father on Thursday as part of their triennial encounter in the Vatican.

The group includes 91 Apostolic Nuncios and 6 Permanent Observers, while 5 Pontifical Representatives were unable to attend due the health reasons or other impediments.

Pope Francis spoke to his representatives about various global issues affecting nations and the Church in the world.

The Pope noted that this encounter comes in the wake of the pandemic.

“The tempest of the Covid-19 pandemic forced various constraints on our daily lives and pastoral activities,” he said. “Now it seems the worst may be behind us, and thank God we are able to meet.”

However, added Pope Francis, the spectre of war has descended on Europe and the world.

“Unfortunately, Europe and the entire world are shaken by a particularly serious war, due to the violation of international law, the risks of nuclear escalation, and the grave economic and social consequences.”

The Pope added that a “third world war fought piecemeal” has gripped the globe, and that Pontifical Representatives are present in the countries involved in the various conflicts.

He thanked them for bringing his closeness to peoples who are suffering.

“You bring the Pope’s closeness to peoples and the Church. You are points of reference in moments of extreme bewilderment and turbulence.”

Pope Francis urged his representatives to entrust their work to the Lord, as they labor in the “today of the Church and world”.

He noted that the Church is currently journeying through the Synod on synodality, while the Roman Curia seeks to apply the Apostolic Constitution Praedicate Evangelium.

“Our brothers have preceded us in our journey, and they invite us to keep our gaze fixed on the path ahead and on the heavens.”