Following the death of Britain’s Queen Elizabeth II, the British Ambassador to the Holy See, Christopher Trott, shares his thoughts on the legacy of the late Queen and her support for the excellent diplomatic relations between the United Kingdom and the Holy See.

Ambassador Christopher Trott presented his Letters of Credence to Pope Francis on 4 September 2021. Appointed by the late Queen Elizabeth II, he was chosen to continue building on the past 40 years of full diplomatic relations between the United Kingdom and the Holy See.

In the wake of Her Majesty's death on Thursday, Ambassador Trott granted an interview with Vatican News to express his personal sadness at the passing of Queen Elizabeth II.

He also highlighted the importance she unfalteringly gave to the official relationship that exists between the UK and the Holy See, as well as her own warm personal relationship with the Popes throughout her 70 years as monarch.

Q: As the United Kingdom and the Commonwealth mourn the late Queen Elizabeth II, could you share with us your thoughts on her legacy and on this moment of transition to a new Monarch, King Charles III?

As the British Ambassador, this moment is a mixture of both personal and official reflections. I have had the honour of serving as Her Majesty’s Ambassador for the last 15 years in various countries, and for me personally, that was such a huge honour. Therefore, this moment is one of profound sadness, which is something that many, many British nationals feel across the globe.

I think Queen Elizabeth II provided for the UK a real sense of stability, a real sense of who we were, a sense of unity and her passing has united people in grief. I am actually in London at the moment watching peoples’ reaction here in the UK before I fly back to Rome. You really feel this sense of sadness. 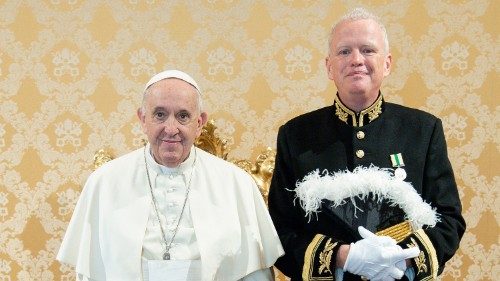 I should say I think that was reflected in some of the international responses. I was very moved by His Holiness the Pope’s message on the passing of Her Majesty, and I think that reflects a message that she personally had invested in building our relationship and supporting the Ambassadors to the Holy See, in building a relationship with five separate Popes over the time of her reign, her first meeting being with Pius XII 1951 and her most recent one being with Pope Francis in 2014 and I think those really reflected a developing relationship between Britain and the Holy See.

Q: The late Queen as you said met with five Popes during her lifetime and with one as a Princess. What can you share about her relationship with the Popes and with the Holy See?

I think she had a huge amount of respect for each of the Popes that she met. And I think that when she met Pope Francis it was a really warm and spontaneous encounter, and there was a real expression of mutual respect which is reflected in the message that Pope Francis sent on her death. And I think that helps support the more formal state-to-state relationship I represent, because having that personal relationship, is reflected in that warmth.

Q: On a more personal level, what was Queen Elizabeth's relationship with the Diplomatic Corps and Ambassadors like yourself? Can you share any personal anecdotes?

So, for an ambassador you are conscious all the time that you are a representative of Her Majesty and your appointment is confirmed  by her. When you come to your new post you bring letters of credentials signed personally by her, to be handed over to the receiving Head of State; and you have the huge honour of being able in the early stages of each of your ambassadorial postings to be able to go an call on her Majesty the Queen – it’s called the “Ceremony of Kissing of the Hand” but doesn’t anymore involve any kissing – but it does involve you and your spouse having a personal conversation with Her Majesty the Queen, which is a huge honour, and she was always incredibly warm and incredibly well informed and really interested in you as a person and your family in a way that was really touching. 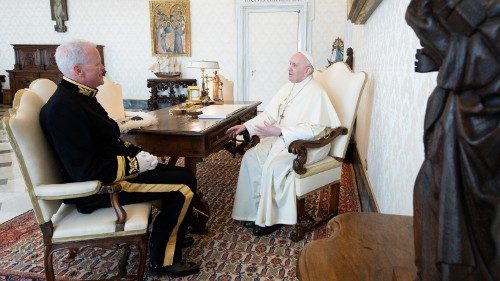 Q: Now, as King Charles III takes over, how do you see him following in his mother's footsteps in relationships with the Holy See?

I think you saw in the statement he made yesterday - he addressed the nation [on Friday] - he echoed many of the things that his mother had said over the years about her responsibility, her duty, her desire to serve her people.

And he referred to his faith in way Her Majesty the Queen would always refer to her faith, and the fact that she was guided by her faith in the decisions she took. And I think for the Holy See this has always been something very striking and something they’ve hugely respected over the years.

I think this will just reinforce the importance of the relationship because here is King Charles recognizing that he is King of a multi-faith country, but talking about his grounding in his Christian faith, which I think will speak very loudly, both to Pope Francis himself and to the Holy See more widely.

Q: Is there anything you would like to add?

I am very grateful to be able to have the opportunity to have this conversation with you. It is important for us to be remembering the guiding hand of Queen Elizabeth’s faith, and I just wanted to quote from her Christmas broadcast in 2002: she said, 'I know just how much I rely on my own faith to guide me through the good times and the bad; each day is a new beginning. I know that the only way to live, my life is to do what is right to take the long view, to give my best in all that the day brings, and put my trust in God.'

And I got the impression but that is also the way that Prince Charles, now King Charles, is approaching his role.