‘To dust you shall return,’ but human composting? California bishops raise objections 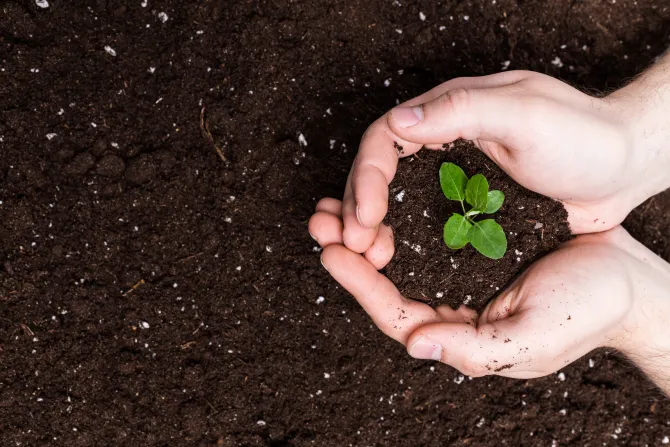 California Gov. Gavin Newsom on Sunday signed a bill into law that will allow the composting of human remains — a bill that the state’s Catholic Conference had opposed.

The process of human composting — also known as natural organic reduction (NOR) — is a relatively new phenomenon in the U.S. and is legal in a handful of other states. When a body is composted, it is placed in a reusable container where microbes and bacteria decompose it into soil over the course of 30–45 days.

The resulting soil can then be used on private land, such as on a farm or garden, and otherwise would be subject to the same restrictions as scattering cremated remains in the state, the LA Times reported.

The state’s Catholic conference had expressed opposition to the bill in a June letter.

Kathleen Domingo, executive director of the California Catholic Conference, said the use of a body composting method originally developed for farm animals creates an “unfortunate spiritual, emotional, and psychological distancing from the deceased.” In addition, she said, the process “reduces the human body to simply a disposable commodity.”

The process will be available in California beginning in 2027. The bill’s sponsor, Assemblymember Cristina Garcia, D-Bell Gardens, argued that the process is more economical and eco-friendly than traditional burial methods and could help to reduce overcrowding in cemeteries.

The Catholic Church does not have an official teaching on the composting of human bodies but has weighed in many times over the years on the practice of cremation. While strongly discouraged, cremation can be permissible under certain restrictions; notably, the remains are not to be scattered and must be kept in a sacred place, out of reverence for the Church’s teaching on the eventual resurrection of the body.

“We believe that the ‘transformation’ of the remains would create an emotional distance rather than a reverence for them,” Steve Pehanich, a spokesperson for the California Catholic Conference, told Religion News Service in 2020.

“Even with cremated remains, they directed that they remain in a communal place befitting of the dignity inherent in the human body and its connection to the immortal soul,” Pehanich said.

In that same document, the Congregation for the Doctrine of the Faith clarified that a person’s ashes are not to be scattered, nor kept in the home or preserved in mementos or jewelry, but instead must be “laid to rest in a sacred place,” such as in a cemetery or church. As the document explains, “by burying the bodies of the faithful, the Church confirms her faith in the resurrection of the body and intends to show the great dignity of the human body as an integral part of the human person whose body forms part of their identity.”