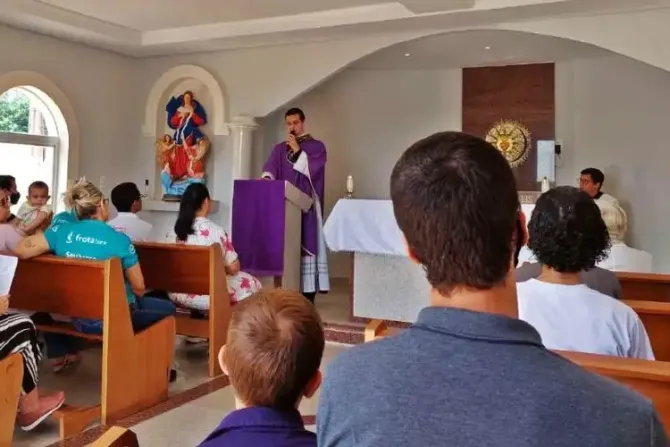 A major gas station chain in Brazil is building chapels for the Blessed Sacrament on the country’s highways to be an “oasis” for travelers.

Although it’s normal for travelers to stop at a service station or gas station to fill the tank of their vehicle, eat something, or rest, in Brazil there are some stations that have chapels where travelers can adore the Blessed Sacrament, go to confession, and attend Mass.

Speaking with ACI Digital, CNA’s Portuguese-language sister news agency, Janeth Vaz, director of Rede Marajó, a chain of highway service stations in Brazil, said that the chain has built seven chapels at its stations with the Blessed Sacrament in the tabernacle because “faith is the first value of our company.”

“The heart of Marajó is the chapel and we know that the One who is in the chapel is the Blessed Sacrament,” she said.

“Today we have seven chapels, but we want to continue building where there are none ... so the Blessed Sacrament can be there,” because it makes “a very big difference,” she said.

Rede Marajó has more than 30 years of experience and describes itself as the “only one” that serves the entire 1,200-mile-long Belém-Brasília Highway, which takes an average of 30 hours’ driving time to cover. In addition, the gas station chain is “the largest Shell distributor” in the country.

Currently, the chain has 19 stations in the states of Pará, Tocantins, Goiás, Mato Grosso, and Minas Gerais.

Vaz said that she comes from a Catholic family that attended Mass “sporadically” but after participating in a charismatic renewal group, she “fell in love” with the Catholic Church.

She added that today she is a great devotee of the Virgin Mary and that although her husband “resisted” at the beginning is now the greatest promoter of the effort to build chapels.

Her husband “said that one day he would build me a church in the backyard, because I went to church a lot. I told him: ‘Yes, you will, but the one who will participate will be more you than me.’ And that’s what happened,” she recalled.

The spouses built the first chapel at the Nova Olinda station in 1992, and the apostolic administrator of the diocese gave them permission to have the Blessed Sacrament.

Every time a new chapel is built, “the first thing we do is go to the parish priest, who asks the bishop for permission to have the Blessed Sacrament,” she said.

They all offer Mass every week and, at some of the chapels, a priest meets with the faithful to hear their confessions, give them spiritual advice, and pray with them.

The Rede Marajó company director said that building these chapels over the last 30 years is “a grace” and the work of the Holy Spirit, because although it’s easy to start, persevering in the effort is not so simple.

Her children, who now run the gas station chain, are continuing with the project.

“They, much more than me, want these chapels and for people to pray there. It was something we instilled and it remained in their hearts,” she said.

An oasis for truckers and travelers

Vaz explained that the idea of building chapels came from thinking about truck drivers, who spend a lot of time on the roads, and said that the chapels are dedicated to Our Lady under her different Marian titles.

The businesswoman said that the priests who go to celebrate Mass at the stations give rosaries to the truck drivers and that they receive them “happily,” because “they love the Virgin” and feel her care for them.

Two truckers saved from suicide thanks to the chapels

“It feels like an oasis in the middle of the desert for them. This oasis has already saved at least two truckers from suicide,” she recounted.

The first truck driver arrived at the Nova Olinda station at night “very desperate” and “with a gun” because he “wanted to take his own life.”

When he saw him, the night watchman took him to the chapel of Our Lady of Graces and he stayed there for a while.

“When he left he was completely different and he no longer had the intention of committing suicide, and he said that he was even going to get rid of the weapon,” she recalled.

The other case occurred recently at the Belém station, in the chapel of Our Lady of Nazareth, when a truck driver who visited the chapel met a priest and decided not to commit suicide.

Vaz recounted that on that day the visiting priest “thought the sanctuary lamp next to the tabernacle had gone out,” so he went into the chapel to light it and saw a man crying.

“The priest identified himself and asked if he could help. The man said that he had gone into the chapel with the idea of taking his own life, but he had told God: ‘If I find a priest here who hears my confession, I’ll change my mind.’ It was just then that the priest came in and the man talked, the priest prayed with him, and he changed his mind,” she related.

Finally, Vaz said that the company encourages its employees to live the Catholic faith and that at all of their gas stations, even those that do not yet have a chapel, they offer a monthly Mass.

In addition, she said that every morning the workers pray together with the aid of the liturgy of the day.

She explained that the employees “aren’t obliged” to pray, but “everything stops until the prayer takes place.” However, Vaz noted that the vast majority participate, because “there is a great unity between Catholics and non-Catholics.”