Tuesday evening Mass with the Pope and the world's Cardinals 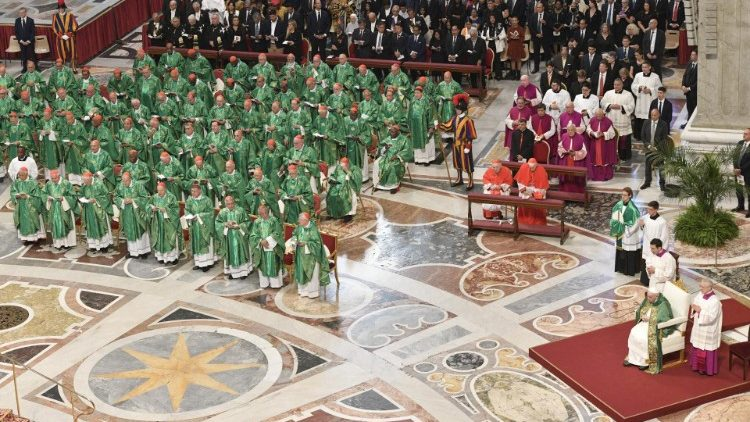 Pope to Cardinals: May wonder, gratitude be ever alive in our hearts

Members of the College of Cardinals gather with Pope Francis for an evening Mass on Tuesday, marking the culmination of several events at the Vatican, and the Pope encourages us to renew our wonder and gratitude before God's saving plan.

Pope Francis presided over the Mass with the new Cardinals and College of Cardinals in St. Peter's Basilica early Tuesday evening.

The celebration followed Saturday's Consistory for the creation of new Cardinals and two days of meetings of all the Cardinals to discuss Praedicate Evangelium, the new Apostolic Constitution of the Roman Curia.

The Mass took place three days after the Consistory given Sunday's pastoral visit of Pope Francis to the Italian city of L'Aquila and the Monday and Tuesday meetings with the Cardinals. Some 190 Cardinals, as well as Eastern Patriarchs and Superiors of the Secretariat of State, participated in the two days of discussion and reflection. 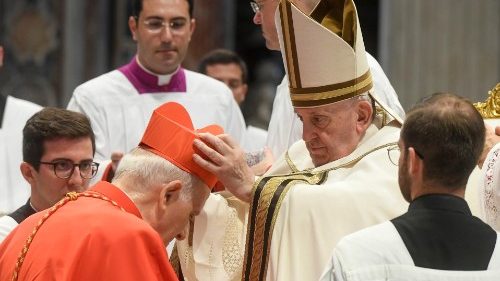 Wonder that inspires and animates

In his homily, Pope Francis reflected on the theme of "wonder" as described in the readings proclaimed during the celebrations: the wonder of St. Paul before God's saving plan and the wonder of the disciples encountering the risen Jesus who called on them to "make disciples of all nations."

He said here we can appreciate how the Holy Spirit guides and moves us forward to proclaim the Gospel and "to all the peoples the wonders of the Lord."

The Pope observed that just as we often marvel at the greatness of the universe, so we are also "full of wonder as we consider the history of salvation," as "all things find their origin, existence, end and purpose in Christ."

“In Christ we were blessed even before the world was created; in Him we were called and redeemed; in Him all creation is restored to unity, and all, near and far, first and last, are destined, by the working of the Holy Spirit, to the praise of God’s glory.”

While we marvel at God's plan of salvation, we can also be further amazed that "God calls us to share in this plan," the Pope pointed out, as we see in the mission given to the apostles by the risen Christ to “Go… make disciples of all nations, baptizing them in the name of the Father and of the Son and of the Holy Spirit, and teaching them to obey everything that I have commanded you” (Mt 28:19-20).

The Lord reassures the disciples telling them “I am with you always, to the end of the age," and this promise "inspires hope and conslation", said the Pope. These words and this mandate are given to us today, he added, thrilling our hearts even after two thousand years gone by. We are further amazed how the divine decision to evangelize the world started with a "ragtag group of disciples," some who still had doubts, but the Pope said that gives hope for ourselves as well.

“This kind of wonder is a way to salvation! May God keep it ever alive in our hearts, for it sets us free from the temptation of thinking that we can “manage things”.”

The Pope said we must avoid a false sense of security thinking that today everything is different and all set, or we risk falling into the "deception, whereby the Father of Lies seeks to make Christ’s followers first worldly, then innocuous." 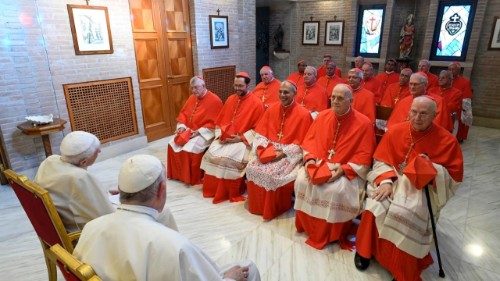 Wonder and gratitude at being Church

The sense of wonder we experience through the Word of God also awakens in us "wonder at being in the Church, of being Church," the Pope added, saying the awareness of being blessed in Christ and bearing witness to Him helps strengthens the community of believers and makes them attractive to others.

The Pope said we rejoice as well in gratitude for these gifts, all the baptized. He recalled Saint Paul VI who offered his legacy of "love for the Church, a love which is first and foremost gratitude, grateful wonder at her mystery and at the gift of our being not only members of the Church, but involved in her life, sharing in and, indeed, jointly responsible for her."

In conclusion, the Pope offered the basics of what it means to be a minister of the Church: "one who experiences wonder before God’s plan, and, in that spirit, passionately loves the Church and stands at the service of her mission wherever and however the Holy Spirit may choose."

“May it also be the case with us! May it be the case with each of you, dear brother Cardinals! May the intercession of the Blessed Virgin Mary, Mother of the Church, obtain this grace for each and every one of us.”