Review of Papal visit to l'Aquila

Pope Francis travels to the central Italian city of L’Aquila, 13 years after a devastating earthquake killed 309 people, and encourages residents to continue rebuilding their lives with faith in God.

Pope Francis traveled 100 km northeast of Rome by helicopter on Sunday morning to the central Italian city of L’Aquila. 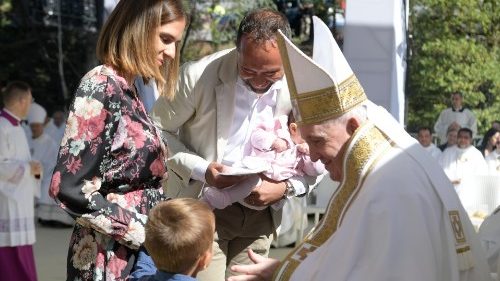 He kicked off his pastoral visit by meeting civil authorities and families of the victims of the 2009 earthquake, which struck in the middle of the night on 6 April 2009.

Around 66,000 people were left homeless, and 309 people were killed in the wake of the quake and subsequent tremors.

On Sunday, Pope Francis followed in the footsteps of his predecessor, Benedict XVI, who made a visit less than a month after the earthquake, on 28 April 2009. The Pope also visited the ruins of the Cathedral of St. Maximus, which was partially destroyed by the 6.3-magnitude earthquake.

Faith and dignity amid the pain

Speaking to the people of L’Aquila, Pope Francis expressed his closeness to the families of those who died and to the entire community which was severely affected by the event.

He praised the “great dignity” and witness of faith which the city displayed after that tragic night.

“Even through the pain and bewilderment, which belong to our pilgrim faith, you have fixed your gaze on Christ, crucified and risen, who by His love has redeemed pain and death from meaninglessness.”

Jesus, added the Pope, has entrusted the people of L’Aquila to the “arms of the Father, who allows not a single tear to fall in vain, not even one!” 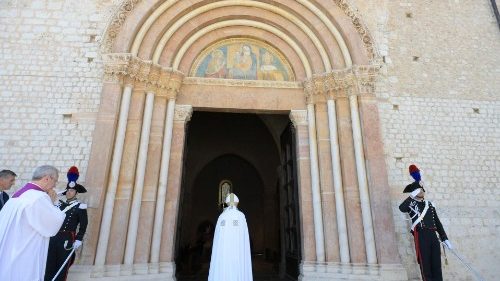 Speaking to the families of the 309 victims, Pope Francis said their loved ones rest in God’s merciful heart.

“Our communion with them is more alive than ever,” he said. “Death cannot shatter love.”

The Pope also praised the way the city’s Catholics have built a “Remembrance Chapel”.

“Memory is the strength of a people,” he said, “and when this memory is illuminated by faith, that people is incapable of remaining a prisoner to the past, but rather walks in the present facing the future, always staying attached to the roots of faith and appreciating the good and bad treasures of past experiences.”

Many buildings must still be rebuilt in L’Aquila, noted Pope Francis. But he reminded residents that physical reconstruction must be accompanied by a “spiritual, social, and cultural rebuilding.”

“Personal and collective rebirth is a gift of Grace, and grows out of the efforts of each person and all together. It is essential to strengthen joint collaboration—carried out in synergy—between institutions and associations: a laborious concord, a farsighted effort.”

Care for houses of worship

Pope Francis concluded his address to the people of L’Aquila with a message of hope and a blessing.

He also reminded them that churches require special attention in the effort to rebuild.

“They are the heritage of the community, not only in the historical or cultural sense, but also in the aspect of your identity,” he said. “Those stones are filled with the faith and values of the people, and churches also offer impetus to the community’s life and hope.”