Recap of Day 1 meeting with the Cardinals and the Pope

The first day of the two-day meeting of the Cardinals with Pope Francis to reflect on Praedicate Evangelium focuses on the importance of communion in the Church and the missionary calling to witness to God's love for all.

After the opening prayer, Pope Francis offered some brief introductory words inviting everyone to participate and offer their own contribution to the discussions during these two days of reflection on Praedicate Evangelium, the Apostolic Constitution reforming the Roman Curia. 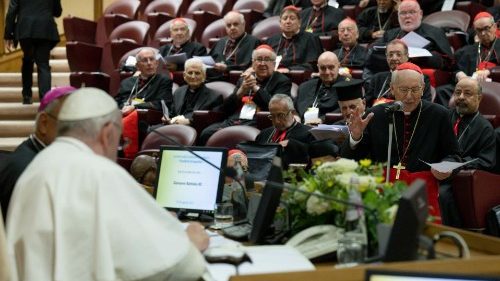 World's Cardinals meet with Pope to reflect on Curia reform

The cardinals then divided into various language groups, and later met all together again to share their reflections.

Cardinal Feroci said the cardinals addressed two main themes: that of communion, about witnessing to mutual love between Christians; then the issue concerning the difficulty of today's society to being open to the Gospel message and ways to overcome these challenges.

Cardinal Marcello Semeraro, Prefect of the Dicastery for the Causes of Saints, emphasized to Vatican News the great participation of the cardinals in the meeting with an open and lively dialogue, particularly on the missionary dimension that the new Apostolic Constitution underscores, as well as the need to focus on the proclamation on the greatest commandment, that we should love one another.