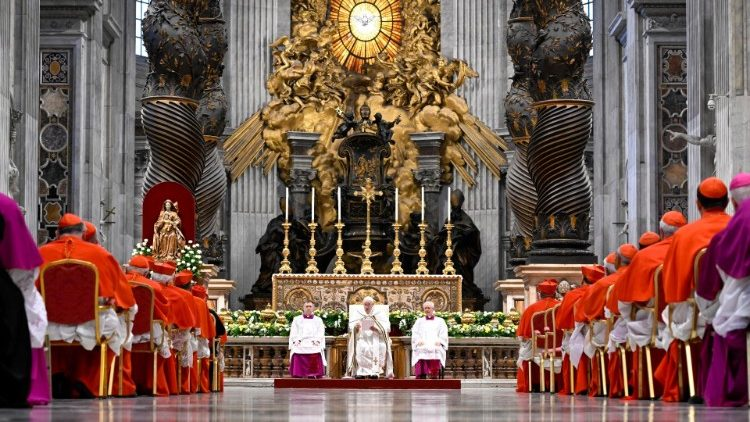 In his homily during the Consistory, Pope Francis encourages 20 newly-created Cardinals to embrace apostolic zeal and bear witness to God's boundless love, and asks everyone to pray for new Cardinal Richard Kuuia Baawobr, Bishop of Wa, Ghana, who was hospitalized Friday after arriving in Rome.

Quoting a passage from Luke's Gospel when Jesus says, “I came to bring fire to the earth, and how I wish it were already kindled!”, Pope Francis focused his homily on the image of fire, the "powerful flame of the Spirit of God," reflecting "a passionate love that purifies, regenerates and transfigures all things."

He looked at two examples of this "fire": the "consuming fire" of God's love, and the "quiet and gentle" charcoal fire that Jesus started at the shore when cooking fish for the disciples, as recounted in John's Gospel.

The Pope was speaking on Saturday at the Ordinary Public Consistory for the creation of Cardinals held in St. Peter's Basilica. This was Pope Francis' eighth Consistory, and he created 20 new Cardinals, 16 of whom are under the age of 80, thus electors in a future Conclave, and four non-electors, over the age of 80. He also asked everyone to pray for Ghanaian Cardinal Richard Kuuia Baawobr, the Bishop of Wa, Ghana, who fell ill upon his arrival in Italy on Friday and spent Saturday in hospital.

After the Consistory, Pope Francis and the new Cardinals present visited Pope Emeritus Benedict XVI in the Mater Ecclesiae Monastery in the Vatican Gardens, praying together the Salve Regina.

In his homily during the Consistory, the Pope noted that for those who have been given a ministry of particular service, "it is as if Jesus is handing us a lighted torch and telling us: 'Take this; as the Father has sent me so I now send you'."  In this way, he said, the Lord gives us His own "apostolic courage" and zeal for the salvation of every human being, without exception.

“He wants to share with us His magnanimity, His boundless and unconditional love, for His heart is afire with the mercy of the Father.”

Within this fire, the Pope explained, there exists a "mysterious tension" of His mission in reaching out in fidelity to His people, but with "openness to all peoples, to the horizons of the world, to peripheries as yet unknown."

"This," he said, "is the fire that Jesus came to 'bring to the earth', a fire that the Holy Spirit kindles in the hearts, hands and feet of all those who follow Him."

The charcoal fire, the Pope explained, reflects Jesus' "meekness, fidelity, closeness and tenderness," and how to "savour the presence of Jesus alive in our midst."

“Like that charcoal fire, His presence becomes warmth and nourishment for our daily life.”

The Pope cited the example of Saint Charles de Foucauld, "who lived for years in a non-Christian environment, in the solitude of the desert, staking everything on presence: the presence of the living Jesus, in the word and in the Eucharist, and his own presence, fraternal, amicable and charitable."

He mentioned other examples of religious and priests "who persevere in selfless and unassuming ministry," as well as married couples who keep the flame of God's love alive through their humble service and raising of children. He mentioned the fire to which the elderly witness through their memory and experience shared with family and community, uniting and moving forward people of different generations.

“Dear brother Cardinals, by the light and in the strength of this fire walk the holy and faithful people from whom we were taken and to whom we have been sent as ministers of Christ the Lord.”

Pope Francis encouraged the 20 new Cardinals to reflect on how the twofold fire of Jesus is experienced in their own lives and to see how "a man of apostolic zeal is impelled by the fire of the Spirit to be concerned, courageously, with things great and small."

Recalling two particular testimonies, the Pope spoke of Italian Cardinal Agostino Casaroli, known for his openness to promoting farsighted dialogue to respond to the new hopes that opened up in Europe following the Cold War. While he focused on this large issues, he also humbly and quietly carried out regular visits to inmates in his pastoral outreach through prison ministry.

He also recalled late Vietnamese Cardinal Van Thuân, who during the twentieth century "was led by the fire of his love for Christ to care for the soul of the prison guards who watched over him at the door of his prison cell."

In conclusion, Pope Francis encouraged everyone to contemplate Jesus, who shows us "this lowly grandeur, this unassuming power, this universal vision ever attentive to particulars." Speaking metaphorically, he said the secret of God's fire brightens the sky and slowly cooks the food of poor families, migrant and homeless persons.

“Today, too, Jesus wants to bring this fire to the earth. He wants to light it anew on the shores of our daily lives. Jesus calls us by name; He looks us in the eye and He asks: Can I count on you?”