By Hannah Brockhaus for CNA 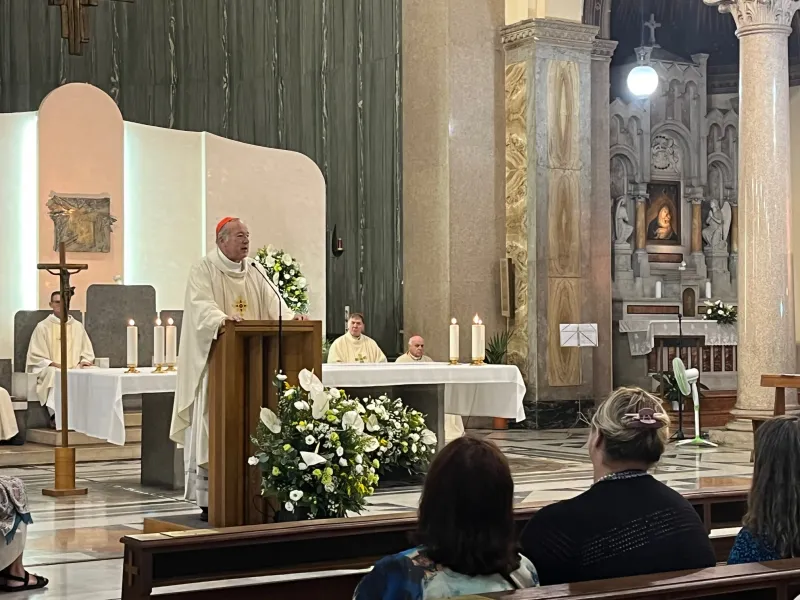 Cardinal Robert McElroy spoke about Christian humility Sunday, at his first public Mass since he was elevated to the College of Cardinals by Pope Francis.

The Aug. 28 Mass of Thanksgiving was celebrated at St. Patrick’s Church, the American Catholic parish in Rome, Italy. McElroy, 68, is the bishop of San Diego.

Christian humility means two things, he said, “Putting aside the pretenses and facades we often put up to try to look better to others than we are. And secondly: challenging, facing, the impulse all of us have to place our own interests ahead of those of others.”

Sunday’s Mass was attended by US Ambassador to the Holy See Joe Donnelly and his wife, Jill Donnelly.

In his homily, Cardinal McElroy spoke about the 2010 movie “Of Gods and Men,” a fictionalized account of the days leading up to the kidnapping and martyrdom of seven Trappist monks in Algeria in 1996.

After debating among themselves about whether to leave their monastery or to stay put despite teh danger, the monks reached a consensus by “putting aside pretenses,” the cardinal said. “So it is with our lives…”

When we live with facades, they become prisons, he said, while “humility calls us to put aside those facades and to be open with people.”

“Humility,” he continued, “calls us to try to challenge that very common human impulse to place our own selves first. It’s a very hard thing to do in practice because it’s so deep in the human heart and soul and spirit.”

“The Gospel challenges us to do precisely this,” he added, “to take account of the rights, the lives … of others, as much as we do of ourselves.”

Posted by Deacon Mike Talbot at 10:03 AM