Cardinal Dolan checks in from Rome meeting of Cardinals

Cardinal Dolan on Curia Reform meeting: an opportunity to learn from those 'on front lines'

In an interview with Vatican News, Cardinal Timothy Dolan, Archbishop of New York, calls Pope Francis' meeting of the world's Cardinals to study the Roman Curia reform 'extraordinarily uplifting'; and, as the war wages in Ukraine, praises the encounter as an opportunity to learn from the service of those Cardinals on the front lines.

As the war wages on in Ukraine, Cardinal Timothy Dolan, Archbishop of New York, says another advantage of this meeting Pope Francis summoned of the world's Cardinals is to be with Cardinals who are on the front lines, to hear about the challenges they face, and to learn from their service.

In an interview with Vatican News on Monday, Cardinal Dolan, who serves as Chair of the Catholic Near East Welfare Association (CNEWA), reflected on the first day of the two-day encounter in the Vatican to discuss reform of the Roman Curia, and specifically highlighted the solidarity of the Cardinals in combating war and helping those in need.

Pope Francis requested that the world's Cardinals should gather in the Vatican on 29-30 August to reflect on the recently-published Apostolic Constitution Praedicate Evangelium on reforming the Roman Curia. 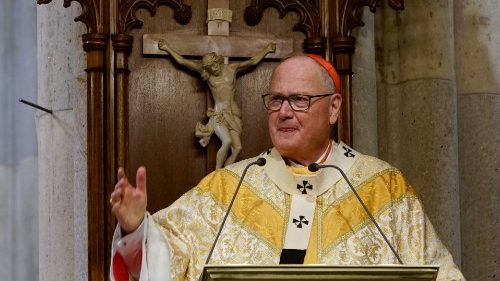 A conversation with Cardinal Dolan ahead of mission to help Ukraine

According to UN statistics from July, at least 12 million people have been forced to flee their homes since the outbreak of the war, with at least 5 million fleeing outside Ukraine to bordering nations, and at least 7 million displaced inside the war-torn nation.

Since Russia invaded Ukraine, some 2 million Ukrainians have found welcome in Poland, and numerous others in Hungary, Slovakia, and other bordering nations. Some Ukrainians have started to return to their country.

Listening to Cardinals on 'front lines'

Cardinal Dolan told Vatican News that after his own visit to Ukraine and the bordering nations, that being among the other Cardinals of the Universal Church, and those closest to the conflict, has been particularly meaningful.

"That's another great advantage of being here," the Cardinal said.

"The Cardinals, by their very nature, mirror the Church Universal, the catholicity of the Church. To be with them now, to talk to Cardinal Péter Erdő of Budapest, as they have been so extraordinarily generous and welcoming, to be with Cardinal Stanisław Dziwisz in Krakow, where they have been welcomed by the people of Poland, close to 4 million refugees."

“To be with these Cardinals who are on the front lines and to hear the challenges, but also to see how uplifting it is to be in service and to hear them so grateful for the solicitude of the world. That's very good.”

During an earlier visit to Rome, in April - his first since the outbreak of the pandemic - Cardinal Dolan sat down with Vatican News to discuss his upcoming journey to meet with suffering Ukrainian refugees and bring them, and those welcoming them, aid.

'Extraordinarily uplifting' encounter in the Vatican

On Monday evening, the Cardinal of New York also gave his impressions of the discussions taking place among the Cardinals, and in their small groups, calling it a "beautiful experience."

"It is a beautiful experience of something that is in danger of becoming too theoretical, namely, collegiality, apostolic fraternity, synodality. No, we experience it there," he said.

“We talk as friends, as brothers, with immense charity and deep love for the Church about very practical issues. It has been extraordinarily uplifting.”

He expressed his appreciation for the encounter.

"I'm glad this has taken place. You look forward to it," but, to some extent, he suggested, out of a sense of duty.

"But I said, 'wow', duty is rewarded because this is a very good thing."

Boots on the ground, wishing to help

Cardinal Dolan's visit to Ukraine and border countries earlier this year was because the Archbishop of New York is ex-officio the chairman of the board of CNEWA.

CNEWA was founded a century ago by Pope Pius XI to assist Eastern-rite Catholics, who very often live in persecuted areas and often are under great stress.

There are many Eastern-rite Catholics in the Middle East, India, Ukraine, and in Central and Eastern Europe.

For that occasion, he told Vatican News, "we are very active, having boots on the ground, and wish to bring them alms, the gifts that Catholic people have given us to help these people. We want to just embrace them and say, 'We love you. We have not forgotten about you. We want to pray with you, encourage you and help.'"

Posted by Deacon Mike Talbot at 10:18 AM