Tuesday Saint of then Day 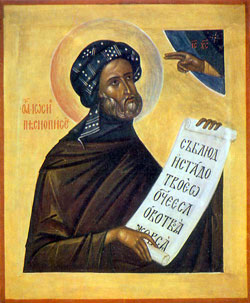 The most prolific of the Greek hymn writers. A native of Sicily, he was forced to leave his island in 830 in the wake of an invasion by the Arabs, journeying to Thessalonica and then to Constantinople. He abandoned the Byzantine capital in 841 to escape the severe Iconoclast per­secution, but on his way to Rome he was captured by pirates and held for several years in Crete as a slave. Finally escaping, he returned to Constantinople and founded a monastery. For his ardent defense of the icons, he was sent into exile in the Chersonese. Joseph is credited with the composition of about one thousand canons. He should not be confused with Joseph of Thessalonica, brother of Theodore of Studium.