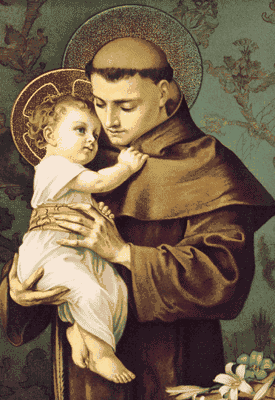 Saint Anthony was born Fernando Martins in Lisbon, Portugal. He was born into a wealthy family and by the age of fifteen asked to be sent to the Abbey of Santa Cruz in Coimbra, the then capital of Portugal. During his time in the Abbey, he learned theology and Latin.

Following his ordination to the priesthood, he was named guestmaster and was responsible for the abbey's hospitality. When Franciscan friars settled a small hermitage outside Coimbra dedicated to Saint Anthony of Egypt, Fernando felt a longing to join them.

Fernando eventually received permission to leave the Abbey so he could join the new Franciscan Order. When he was admitted, he changed his name to Anthony.

Anthony then traveled to Morocco to spread God's truth, but became extremely sick and was returned to Portugal to recover. The return voyage was blown off-course and the party arrived in Sicily, from which they traveled to Tuscany. Athony was assigned to the hermitage of San Paolo after local friars considered his health.

As he recovered, Anthony spent his time praying and studying.

Though he tried to object, Anthony delivered an eloquent and moving homily that impressed both groups. Soon, news of his eloquence reached Francis of Assisi, who held a strong distrust of the brotherhood's commitment to a life of poverty. However, in Anthony, he found a friend.

In 1224, Francis entrusted his friars' pursuits of studies to Anthony. Anthony had a book of psalms that contained notes and comments to help when teaching students and, in a time when a printing press was not yet invented, he greatly valued it.

When a novice decided to leave the hermitage, he stole Anthony's valuable book. When Anthony discovered it was missing, he prayed it would be found or returned to him. The thief did return the book and in an extra step returned to the Order as well.

The book is said to be preserved in the Franciscan friary in Bologna today.

Anthony occasionally taught at the universities of Montpellier and Toulouse in southern France, but he performed best in the role of a preacher.

So simple and resounding was his teaching of the Catholic Faith, most unlettered and the innocent could understand his messages. It is for this reason he was declared a Doctor of the Church by Pope Pius XII in 1946.

Once, when St. Anthony of Padua attempted to preach the true Gospel of the Catholic Church to heretics who would not listen to him, he went out and preached his message to the fish. This was not, as liberals and naturalists have tried to say, for the instruction of the fish, but rather for the glory of God, the delight of the angels, and the easing of his own heart. When critics saw the fish begin to gather, they realized they should also listen to what Anthony had to say.

He was only 35-years-old when he died and was canonized less than one year afterward by Pope Gregory IX. Upon exhumation some 336 years after his death, his body was found to be corrupted, yet his tongue was totally incorrupt, so perfect were the teachings that had been formed upon it.

He is typically depicted with a book and the Infant Child Jesus and is commonly referred to today as the "finder of lost articles."

St Anthony is venerated all over the world as the Patron Saint for lost articles, and is credited with many miracles involving lost people, lost things and even lost spiritual goods.