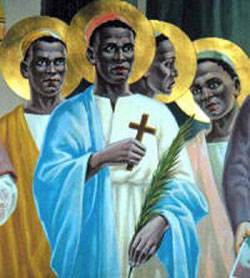 For those of us who think that the faith and zeal of the early Christians died out as the Church grew more safe and powerful through the centuries, the martyrs of Uganda are a reminder that persecution of Christians continues in modern times, even to the present day.

The Society of Missionaries of Africa (known as the White Fathers) had only been in Uganda for 6 years and yet they had built up a community of converts whose faith would outshine their own. The earliest converts were soon instructing and leading new converts that the White Fathers couldn't reach. Many of these converts lived and taught at King Mwanga's court.

King Mwanga was a violent ruler and pedophile who forced himself on the young boys and men who served him as pages and attendants. The Christians at Mwanga's court who tried to protect the pages from King Mwanga.

The leader of the small community of 200 Christians, was the chief steward of Mwanga's court, a twenty-five-year-old Catholic named Joseph Mkasa (or Mukasa).

When Mwanga killed a Protestant missionary and his companions, Joseph Mkasa confronted Mwanga and condemned his action. Mwanga had always liked Joseph but when Joseph dared to demand that Mwanga change his lifestyle, Mwanga forgot their long friendship. After striking Joseph with a spear, Mwanga ordered him killed. When the executioners tried to tie Joseph's hands, he told them, "A Christian who gives his life for God is not afraid to die." He forgave Mwanga with all his heart but made one final plea for his repentance before he was beheaded and then burned on November 15, 1885.

Charles Lwanga took over the instruction and leadership of the Christian community at court -- and the charge of keeping the young boys and men out of Mwanga's hands. Perhaps Joseph's plea for repentance had had some affect on Mwanga because the persecution died down for six months.

Anger and suspicion must have been simmering in Mwanga, however. In May 1886 he called one of his pages named Mwafu and asked what the page had been doing that kept him away from Mwanga. When the page replied that he had been receiving religious instruction from Denis Sebuggwawo, Mwanga's temper boiled over. He had Denis brought to him and killed him himself by thrusting a spear through his throat.

He then ordered that the royal compound be sealed and guarded so that no one could escape and summoned the country's executioners. Knowing what was coming, Charles Lwanga baptized four catechumens that night, including a thirteen-year-old named Kizito. The next morning Mwanga brought his whole court before him and separated the Christians from the rest by saying, "Those who do not pray stand by me, those who do pray stand over there." He demanded of the fifteen boys and young men (all under 25) if they were Christians and intended to remain Christians. When they answered "Yes" with strength and courage Mwanga condemned them to death.

He commanded that the group be taken on a 37 mile trek to the place of execution at Namugongo. The chief executioner begged one of the boys, his own son, Mabaga, to escape and hide but Mbaga refused. The cruelly-bound prisoners passed the home of the White Fathers on their way to execution. Father Lourdel remembered thirteen-year-old Kizito laughing and chattering. Lourdel almost fainted at the courage and joy these condemned converts, his friends, showed on their way to martyrdom. Three of these faithful were killed on road.

A Christian soldier named James Buzabaliawo was brought before the king. When Mwanga ordered him to be killed with the rest, James said, "Goodbye, then. I am going to Heaven, and I will pray to God for you." When a griefstricken Father Lourdel raised his hand in absolution as James passed, James lifted his own tied hands and pointed up to show that he knew he was going to heaven and would meet Father Lourdel there. With a smile he said to Lourdel, "Why are you so sad? This nothing to the joys you have taught us to look forward to."

Also condemned were Andrew Kagwa, a Kigowa chief, who had converted his wife and several others, and Matthias Murumba (or Kalemba) an assistant judge. The chief counsellor was so furious with Andrew that he proclaimed he wouldn't eat until he knew Andrew was dead. When the executioners hesitated Andrew egged them on by saying, "Don't keep your counsellor hungry -- kill me." When the same counsellor described what he was going to do with Matthias, he added, "No doubt his god will rescue him." "Yes," Matthias replied, "God will rescue me. But you will not see how he does it, because he will take my soul and leave you only my body." Matthias was cut up on the road and left to die -- it took him at least three days.

The original caravan reached Namugongo and the survivors were kept imprisoned for seven days. On June 3, they were brought out, wrapped in reed mats, and placed on the pyre. Mbaga was killed first by order of his father, the chief executioner, who had tried one last time to change his son's mind. The rest were burned to death. Thirteen Catholics and eleven Protestants died. They died calling on the name of Jesus and proclaiming, "You can burn our bodies, but you cannot harm our souls."

When the White Fathers were expelled from the country, the new Christians carried on their work, translating and printing the catechism into their natively language and giving secret instruction on the faith. Without priests, liturgy, and sacraments their faith, intelligence, courage, and wisdom kept the Catholic Church alive and growing in Uganda. When the White Fathers returned after King Mwanga's death, they found five hundred Christians and one thousand catchumens waiting for them. The twenty-two Catholic martyrs of the Uganda persecution were canonized.

Martyrs of Uganda, pray for the faith where it is danger and for Christians who must suffer because of their faith. Give them the same courage, zeal, and joy you showed. And help those of us who live in places where Christianity is accepted to remain aware of the persecution in other parts of the world. Amen