Pope Francis speaks to value of children, families and against evils that threaten them

Pope: Children are indispensable resource for the future

Thanking the Federation of Catholic Family Associations in Europe (FAFCE) for its service to families, including those fleeing from Ukraine, Pope Francis calls for the Church to accompany families, and deplores threats such as 'the pandemic of loneliness,' surrogacy, and pornography.

Children are an indispensable resource for the future, and never a threat toward the environment. Instead, consumerism and individualism must be addressed.

Pope Francis gave this powerful reminder to members of the Federation of Catholic Family Associations in Europe (FAFCE) in the Vatican on Friday. 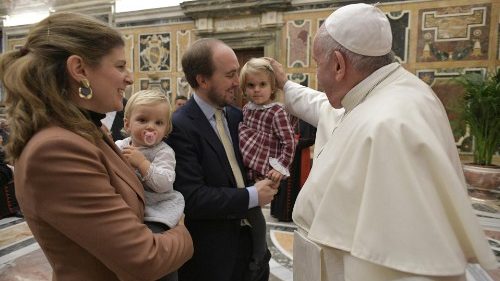 'We must convince communities that family is a resource'

The Holy Father encouraged the FAFCE members to go ahead in their good work at the service of the family, especially in this time of war.

He thanked them for bringing a voice to European institutions and for their work to form networks of families throughout Europe. He expressed gratitude that in the last five years, the Federation welcomed ten new family organizations and four new European countries, including Ukraine, into its fold.

“This mission is fully in line with the synodal journey we are living, to make the Church become more of a family of families.”

In his remarks, Pope Francis called for supporting families, and warned against discrimination against them and children, as well as low birthrates, disregard for the elderly, and the scourge of pornography.

The Pope lamented that at this time in Europe, families are experiencing a dramatic and tragic moment because of the war in Ukraine.

Recalling that families do not want war, the Pope applauded families and family networks who have been and are at the forefront of welcoming refugees, especially in Poland, Lithuania, and Hungary.

The Holy Father applauded the Federation's having drawn attention to the decline in births in Europe, and especially in Italy.

"I encourage you to continue your work to foster the birth and consolidation of family networks. This is a valuable service, because there is a need for places, meetings, and communities where couples and families feel welcomed, accompanied, never alone," the Pope said.

“[ There is an urgent need for local churches, in Europe and beyond, to open up to the action of lay people and families accompanying families. ”

Children, indispensable resource for the future

The Holy Father recognized the great and interconnected challenges facing families. For example, he said, "one cannot speak of sustainable development without solidarity between generations."

“States have the task of removing obstacles to the growth of families and of recognizing that the family constitutes a common good to be rewarded, with natural positive consequences for all.”

The Pope decried when children are "considered a lack of responsibility towards Creation or its natural resources," noting, "the concept of an 'ecological footprint' cannot be applied to children, as they are an indispensable resource for the future."

Rather, he insisted, "consumerism and individualism must be addressed, looking to families as the best example of resource optimization."

Pornography: permanent attack on dignity and threat to public health

The Holy Father deplored pornography which threatens family and society.

“The scourge of pornography, now spread everywhere via the Web, must be denounced as a permanent attack on the dignity of men and women. It is not only a matter of protecting children-the urgent task of the authorities and all of us-but also of declaring pornography as a threat to public health. It would be a serious illusion to think that a society in which abnormal consumption of sex on the internet is rampant among adults is then capable of effectively protecting minors.”

Family networks, in cooperation with schools and local communities, the Pope insisted, "are key to preventing and combating this scourge, healing the wounds of those in the vortex of addiction."

'Womb-renting' and pandemic of loneliness

Pope Francis warned against when the dignity of men and women is also threatened "by the inhumane and increasingly widespread practice of 'womb renting', in which women, almost always poor, are exploited, and children are treated as commodities."

In addition, the Pope decried a "hidden pandemic" that the Covid-19 pandemic brought to light but is often ignored, "the pandemic of loneliness."

“While many families have rediscovered themselves as domestic churches, it is also true that too many families have experienced loneliness, and their relationship with the Sacraments has often become merely virtual. Family networks are an antidote to loneliness. Indeed, they are, by their very nature, called to leave no one behind, in communion with pastors and local churches.”

"The mutual love between man and woman,” the Pope recalled, “is a reflection of the absolute and unfailing love with which God loves the human being, destined to be fruitful and to be fulfilled in the common work of the social order and the care of Creation."

“The family founded on marriage is, therefore, at the center. It is the first cell of our communities and must be recognized as such, in that it generates life and has a unique and inalienable function. Not because it is an ideal and perfect entity, not because it is an ideological model, but because it represents the natural place of first relationships.”

"Go forth in your service!" the Pope said, encouraging them to always be "ready to respond to the demands of the Gospel."

The Holy Father concluded by giving his blessing and asking them to pray for him.