Pope to families: I want the Church to be a Good Samaritan for you

At the Festival of Families opening the World Meeting of Families, Pope Francis invites families to take a “step forward” in order to “change the world and make it a home for all those who need to feel welcomed and accepted.”

The Tenth World Meeting of Families opened on Wednesday night, with a Festival of Families celebrated in the presence of Pope Francis.

This year’s edition of the Meeting is being held in dioceses and parishes around the world, in a “polycentric and widespread” format that differs from previous years. At the same time, more than two thousand delegates from 120 countries have come to Rome for the five-day event, which aims at highlighting the beauty of marriage and the family in today’s world. 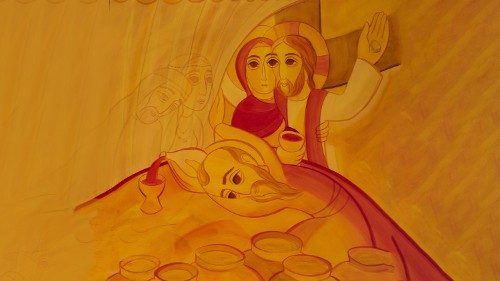 Pope: ‘Family love is a vocation and path to holiness'

Bearing witness to the joys and hardships of family life

Pope Francis participated in the opening ceremonies in the Vatican’s Paul VI Hall, listening to the witness borne by several families who shared their experiences of the joys, concerns, hardships, and hopes of family life in the modern world.

They included the parents of the Servant of God Chiara Corbella Petrilla, a pro-life advocate who maintained her faith as she battled against cancer; a Ukrainian mother and her daughter, along with the large Italian family that welcomed them after they fled the war in Ukraine; and the Muslim widow of the Italian ambassador to the Democratic Republic of Congo, who was assassinated while carrying out humanitarian work.

Responding to their testimonies, Pope Francis assured all married couples and families throughout the world of his closeness to them in their concrete situations. He offered them his words of encouragement: “Start from where you are, and from there, try to journey together: together as couples, together in your own families, together with other families, together with the Church.”

Recalling the image of the Good Samaritan, the Holy Father said, “That is what I want the Church to be for all of you: A Good Samaritan that draws near to you and helps you to continue your journey and to take a step forward, however small.”

He went on to indicate some of those steps, drawing on the testimonies presented earlier by families: stepping forward towards openness to marriage, to embracing crosses, towards forgiveness, towards being welcoming to others, and towards fostering fraternity.

A mission and a witness for the world

Concluding his remarks, Pope Francis emphasized that every family “has a mission to carry out in our world, a testimony to give.”

He invited families to ask themselves, “What is the word that the Lord wants to speak through our life to all those whom we meet? What ‘step forward' is he asking of our family today?”

The World Meeting of Families continues through the weekend, culminating in a final Mass celebrated by Pope Francis in Saint Peter’s Square on Saturday night, with a final “Mandate to Families” delivered by the Pope at the Angelus on Sunday.

Posted by Deacon Mike Talbot at 9:42 AM