Navigating the crises in the Church with Fr. Gerald Murray

How can Catholics navigate the crises in the Church and society?

“Sometimes we feel let down by God when problems arise in the Church,” says Fr. Gerald Murray, co-author of Calming the Storm: Navigating the Crises Facing the Catholic Church and Society, “That is the devil’s suggestion and leads us away from God.” 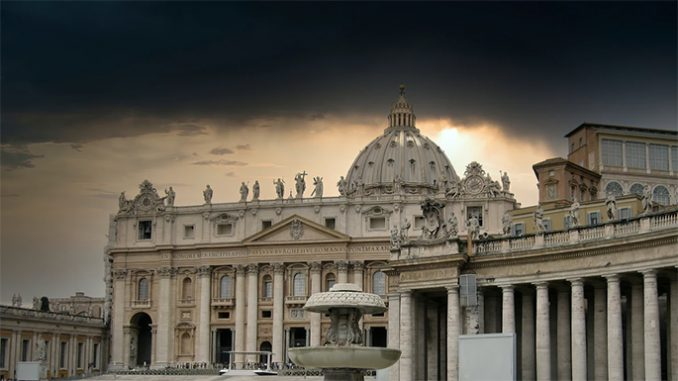 Readers may recognize Fr. Gerald Murray as a member of the “Papal Posse”, along with Robert Royal, on EWTN’s The Word Over with Raymond Arroyo. On that program, as well as through his writing for The Catholic Thing and other outlets, Fr. Murray has earned a reputation as an astute and insightful observer of matters in the Church and the world.

Fr. Murray and Diane Montagna recently completed a book-length interview titled Calming the Storm: Navigating the Crises Facing the Catholic Church and Society (Emmaus Road Publishing, 2022). In this book, interviewer and interviewee tackle some of the most pressing issues facing the Church. Fr. Murray examines and diagnoses those issues, and then presents a game plan of sorts for what Catholics can or should do.

Fr. Murray recently spoke with Catholic World Report about his book, and the ways Catholics can fight the storm of confusion in the Church today.

Catholic World Report: How did this book come about?

Fr. Gerald Murray: Dr. Scott Hahn is someone I have admired since I first heard the cassette recording of his conversion story. He asked Diane Montagna and I if we would be willing to do an interview book about the situation in the Church and the world for Emmaus Road Publishing. Diane had done an excellent interview book with Bishop Athanasius Schneider, Christus Vincit, which we had both endorsed. Scott was familiar with my columns at TheCatholicThing.org and with my commentary as part of Raymond Arroyo’s Papal Posse on EWTN. The book would give me a chance to expand on my analysis of the current situation.

CWR: Chapter 2 is entitled “Age of Confusion”. Certainly this is not the only age marked by confusion, but would you say that is a particular feature of our time?

Fr. Murray: Our time is marked by a rejection of reason, of rationality, of man’s ability to know the truth about the world. The natural order of creation is also denied. Man is told he can be whatever he wants to be, he can overturn and reshape reality. There is no moral order making binding claims upon our behavior. Good and evil depend upon what each person decides for himself, and for others. God’s revelation is subject to reworking. Nothing is fixed or permanent. It is a recipe for chaos and violence.

CWR: Why is there such division even within the Church? I’m thinking of the German “Synodal Way”, and the fact that one can’t simply walk into a Catholic parish and trust that the pastor will be faithful and orthodox.

Fr. Murray: The Catholic Church in Germany is being led by bishops, working together with certain lay people, who publicly and unapologetically reject various teachings of the Catholic Church. They have made a conscious decision, for instance, that Catholic teaching on the inherent immorality of homosexual acts is wrong and must be changed. They do the same for the teaching that only males can be validly ordained as priests. Their ideas are embraced by some in other countries.

The public boldness of these dissenters from Church teachings is a major cause of the divisions we see in the Church. When a bishop decides that he can no longer teach what he promised to teach when he was ordained a bishop he has to make a decision: will he resist embracing what he knows the Church rejects and thus remain faithful to his oath as a bishop; or will he resign from the episcopate and seek to promote his erroneous teachings elsewhere; or will he try to use his position of authority and influence to attempt to subvert the Church’s teaching by claiming that the Church is wrong and he is right.

Cardinal Marx of Munich and his colleagues who have embraced the errors of the Synodal Way have chosen the path of subversion in plain sight.

CWR: Whenever someone talks about the current problems in the Church, they are often accused of implying that the Church used to be perfect, and of wanting to turn back the clock. (This is often put in the context of some sort of pre-Vatican II idealism.) How would you respond to that?

Fr. Murray: The Church is called by God to be the faithful guardian and propagator of the Deposit of Faith that she received from Christ through the apostles. Her role is thus to preserve that Deposit from errors and to deepen our understanding and appreciation of the truths taught by Christ. This task is essentially a conservative one, meaning that the Church must not allow what she has believed from the beginning to be lost through negligence in teaching or worse, through intentional efforts to change that teaching.

Perfection has not existed in the past in the life of the Church and never will, yet it can be shown that various times have been marked by a greater flourishing of Church life, manifested in the holiness of her saints and in the remarkable fidelity of ordinary believers to the Church’s teachings in the face of heresies and persecutions.

CWR: What role can the liturgy play in “calming the storm” and cutting through the confusion and division in the Church and the world?

Fr. Murray: The reverent and prayerful celebration of the Sacred Liturgy of the Church always produces interior peace and confirms the worshippers in the truths of the faith. Christ the High Priest acts in the liturgy in ways that cannot be observed except with the eyes of faith. When priests celebrate Mass carefully following the instructions in the missal they allow the ritual to speak to souls directly, without their having to wade through the distractions produced when the celebrant changes the words or modifies the ceremonies.

CWR: The problem of Catholics who don’t know the faith is not merely an internal ecclesiastical issue. Baptized Catholics are all over society, including in our nation’s (and others’) highest political offices. And with issues such as abortion, marriage, and more, many of them are actively supporting policies in direct contradiction to the Church’s teaching. How can we address this problem?

Fr. Murray: The first step is to recognize that we in fact have a problem which is based in part on ignorance of Catholic teaching, and in part on the willful rejection by some of certain teachings that are well known, such as the immorality of abortion or the impossibility of so-called same sex marriage.

The next step is for the shepherds of the Church to teach Catholic truth with renewed vigor, and to call Catholics in public life who give scandal by their rejection of Church teaching to repent of their error. If they refuse to heed the bishops’ admonitions, then they must be subjected to canonical penalties designed to call them back from error into the truth.

CWR: What hope do you see for the Church’s future? Put another way, what would you say to someone who feels hopeless amid the “storm”?

Fr. Murray: God is good and remains with his Church at all times. Hopelessness is not a Christian way to look at our situation. Rather we must trust in God, pray to him for help, and do what we can to promote the mission of the Church in complete fidelity to Christ and his teachings. When things are tough due to infidelity and immorality inside and outside of the Church the faithful witness we give is both pleasing to God and edifying to our neighbor.

When I think of the spread of immorality and unbelief in the world during my lifetime, I remind myself of God’s goodness in giving us such witnesses of holiness as Saint Teresa of Calcutta, Saint John Paul II, Saint Maximillian Kolbe, etc.

CWR: What are you hoping readers will take away from the book?

Fr. Murray: I hope the readers will gain a deeper understanding of what is going on in the life of the Church and in the world, where there are many serious problems that tend to destroy faith and lead people away from God. Knowing where things stand helps us to respond properly to these challenges which God is asking us to deal with. Despair, bitter anger, and pointless complaining are useless distractions when faced with disaster. Our Faith teaches us that we should, like the apostles in the boat when the storm came up, turn to God in confidence and ask him to calm the storm around us.

CWR: Is there anything else you would like to add?

Fr. Murray: Sometimes we feel let down by God when problems arise in the Church. That is the devil’s suggestion and leads us away from God. No, we must have absolute trust in God’s goodness and his loving care for us. Good is always produced when we remain firm in faith and ardent in charity no matter what else is going on.

One of the Jesuits at my high school always signed off his letters with this phrase: Courage and Confidence! That is what God calls us to and what he freely gives us when we turn to him.