Many church leaders in the United States call for new answers on guns, violence, mass shootings

US State and Church leaders push for better gun-control measures

In the wake of the country’s more than 200 mass shootings since the start of 2022, President Joe Biden called on Congress on Tuesday to find a way to limit sales of assault rifles.

Appealing to Congress to act, he asked: 'How much more carnage are we willing to accept?' and called for the passing of “commonsense laws to combat the epidemic of gun violence that is taking lives every day."

This week, on Wednesday in Tulsa, Oklahoma, another gunman shot and killed four people and himself at a hospital.

The Texas tragedy took place last week at an elementary school in Uvalde, where 19 fourth-grade students and two teachers were killed.

Last month, in New York, ten people were killed and three others wounded in a mass shooting at a Buffalo grocery store.

President Biden is encouraging House representatives to vote for restrictions that could limit high-powered weapons like the ones used in Uvalde.

As the House is working on a gun bill,  partisan positions emerged during a Judiciary Committee hearing Thursday on legislation that would raise the age limit for purchasing semi-automatic rifles from 18 to 21.

The bill also would make it a federal offense to import, manufacture or possess large-capacity magazines and would create a grant program to buy back such magazines.

Pope Francis called for an end to the indiscriminate trafficking of arms the day after the Texas elementary school shooting, saying he was praying for the children and adults who were killed, and for their families. 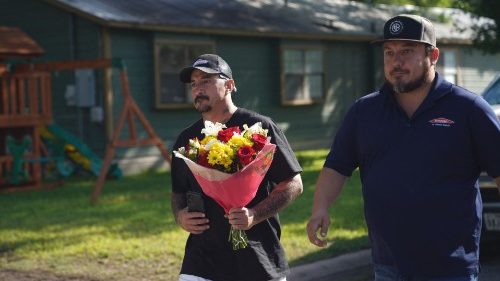 "It is time to say enough to the indiscriminate trafficking of arms. Let us all commit ourselves so that such tragedies can never happen again.”

The Pope also sent a telegram to Archbishop Gustavo Garcia-Siller of San Antonio, reassuring those affected of his spiritual closeness.

“With firm faith in the Risen Christ, through whom every evil will be overcome by good (cf. Rom 12:21),” the Pope also prayed “that those tempted to violence will choose instead the path of fraternal solidarity and love.”

Cannot be the new ‘normal’

Archbishop García-Siller condemned the tragedy in his archdiocese, saying, "When will these insane acts of violence end?"

"It is too great a burden to bear,” the San Antonio Archbishop stressed.

“The word tragedy doesn't begin to describe what occurred. These massacres cannot be considered 'the new normal.'"

Cardinal Blase J. Cupich, Archbishop of Chicago, also decried that American massacre, saying: "The right to bear arms will never be more important than human life. Our children have rights too. And our elected officials have a moral duty to protect them.”

He highlighted a 2021 Northwestern Medicine study that found that the Federal Assault Weapons Ban prevented 10 mass shootings during the 10 years it was in effect to show that gun-safety measures are necessary and have an impact.

"Researchers," the Cardinal of Chicago illustrated, "also determined that if the ban had remained in place in the years since it was allowed to expire, it could have prevented another 30 public mass shootings that killed 339 people and injured 1139 more."

Entrusting the deceased to Our Lady

Following the Texas school shooting, the President of the U.S. Conference of Catholic Bishops, Archbishop Jose H. Gomez of Los Angeles, entrusted those killed to Our Lady of Guadalupe, asking that she “take the victims of this violence in her tender arms, and bring comfort to those who mourn, and healing those who are hurt.”

The Archbishop also asked that “God grant peace to every heart that is troubled tonight. We ask this in Jesus’ name.”

In the wake of other mass shootings plaguing the country, Archbishop Gomez prayed: “We ask that God grant wisdom and prudence to law enforcement and public officials working to make sense of the violence and keep our communities safe.”