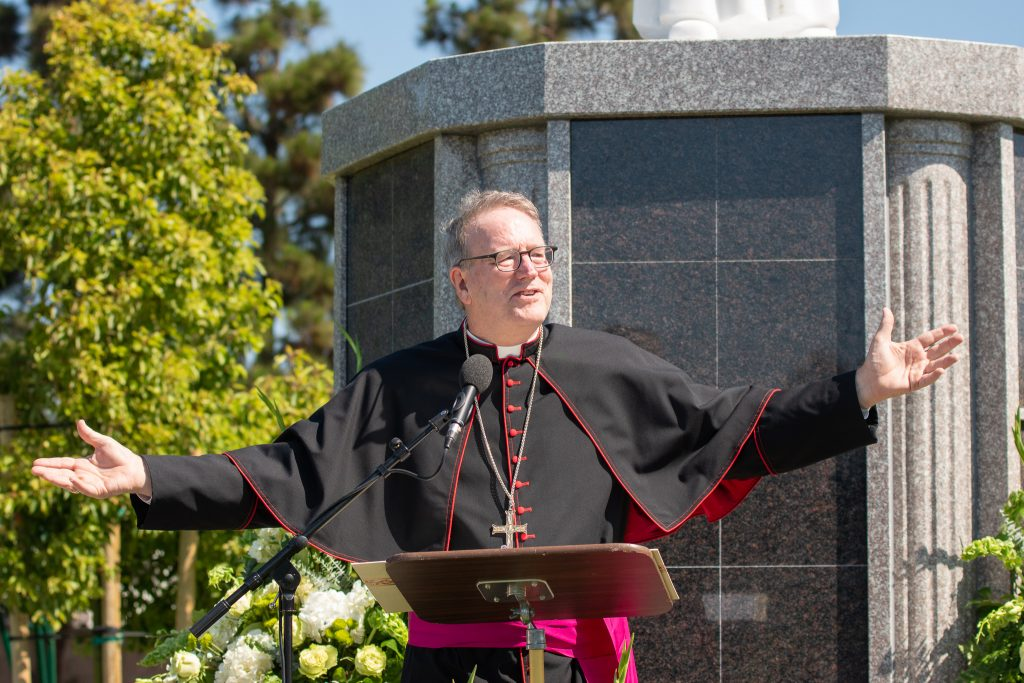 Pope Francis has named Bishop Robert E. Barron the next bishop of the Diocese of Winona-Rochester in Minnesota, transferring him from the Santa Barbara pastoral region of the Archdiocese of Los Angeles, where he has served as an auxiliary bishop for nearly seven years.

The appointment was announced by the Vatican at noon today in Rome (3 a.m. Los Angeles time).

The 62-year-old Chicago native will succeed Bishop John M. Quinn, who in December 2020 turned 75, the age at which canon law requires bishops to submit their resignation to the pope. Bishop Barron is expected to be formally installed as bishop of the diocese sometime in the coming months.

In a statement shared via Word on Fire Thursday morning, Bishop Barron recalled the “extraordinary privilege” of serving in the Archdiocese of Los Angeles, a place “where the priests and people received me, from the beginning, with warmth and enthusiasm, and where I had the good fortune to observe close up the ministry of Archbishop Jose Gomez, one of the great churchmen on the scene today.”

“It is with real sadness in my heart that I take leave of the good people of the Santa Barbara pastoral region,” Bishop Barron added. “Together, we made our way through fire, flood, mudslides, and COVID, and I will never forget your kindness to me and never cease to draw strength from your faith.”

For his part, Archbishop José H. Gomez of Los Angeles praised Bishop Barron as “a man of prayer, with a fine intellect and a beautiful zeal to spread the love of Jesus Christ.”

“I am certain that he will be a great shepherd for the family of God in Winona-Rochester,” said Archbishop Gomez, who ordained Barron a bishop in 2015 at the age of 55, together with the two other so-called “triplets” named auxiliary bishops for Los Angeles at the time, David G. O’Connell and Joseph Brennan. “I am very grateful for his service here in the Santa Barbara Pastoral Region over these past several years.”

“Personally, I am going to miss him, and so will the people of Santa Barbara and all of us in the Archdiocese of Los Angeles,” Archbishop Gomez continued. “Entrusting him to the tender care of Our Lady of Guadalupe, I wish him all God’s blessings in his new appointment.”

The nomination places Bishop Barron as shepherd of a diocese home to more than 100,000 Catholics in 107 parishes spread across more than 12,000 square miles in southern Minnesota. Winona is also home to St. Mary’s University of Minnesota, a Catholic liberal arts college founded in 1912 and associated with the De La Salle Brothers.

Formerly known as the Diocese of Winona, the diocese was renamed the Diocese of Winona-Rochester by the Vatican in 2018 to include the city of Rochester 40 miles to the west, which has far outgrown Winona since the diocese was first established in 1889. The diocese filed for Chapter 11 bankruptcy in 2018, and in 2021 announced a $21.5 million settlement with survivors of sexual abuse as part of a court-ordered reorganization plan.

When Bishop Barron was first named a bishop by Pope Francis in 2015, he came to Los Angeles with a reputation as a noted theologian and the Catholic Church’s best-known English-speaking media evangelist. During his time as a priest in Chicago, he founded the Word on Fire media apostolate, which in 2011 produced the award-winning “Catholicism” mini-series and has since grown in its efforts to introduce the Catholic faith to audiences around the world, especially online.

Over the past seven years, Bishop Barron has become a familiar presence in parishes in the Santa Barbara Pastoral Region, the northernmost of the LA Archdiocese’s five pastoral regions. He was also involved in the Holy See’s decision to elevate Mission San Buenaventura, founded in 1782 by St. Junípero Serra and located in the Santa Barbara Pastoral Region, to the rank of minor basilica in 2020.

At the time of his appointment to LA in 2015, then-Father Barron was rector/president of the Archdiocese of Chicago’s Mundelein Seminary and University of St. Mary of the Lake. Since moving to California, Bishop Barron has continued to stress evangelizing the digital realm as a top priority for the Church.

“So much of the culture in the West is determined out of a place like this, for weal and for woe: both the good and the bad are here,” Bishop Barron said of Los Angeles in an interview with Angelus in 2018. “I think that is important.”

In recent years, Bishop Barron has emerged as a leader among the U.S. bishops on the task of evangelization.

From 2017 to 2020, he served as chairman of the United States Conference of Catholic Bishops’ Committee on Evangelization and Catechesis. In 2018, he was one of five bishops elected by the conference to represent the U.S. as delegates at the Synod of Bishops on Young People, the Faith, and Vocational Discernment at the Vatican.

Last November he was elected to lead the USCCB’s Committee on Laity, Marriage, Family Life and Youth, a role he will officially begin in November of this year.