At the Vatican today is the Solemnity of Corpus Christi

Cardinal Gambetti on Corpus Christi: “Give of yourselves like Jesus did"

Celebrating the Solemnity of Corpus Christi in the Vatican, Cardinal Mauro Gambetti recalls that faith and a change of attitude are necessary in order to accomplish what Jesus asks of us.

Presiding at Holy Mass on the Solemnity of Corpus Christi in St. Peter’s Basilica, the Archpriest of the Basilica, Cardinal Mauro Gambetti, reflected on the day's Gospel reading in which Jesus told the crowd “I am the living bread that came down from heaven; whoever eats this bread will live forever; and the bread that I will give is my flesh for the life of the world” (Jn 6:55).

The solemnity of Corpus Christi celebrates the presence of the Body and Blood of Jesus Christ in the Eucharist, and it is marked on the Thursday after Trinity Sunday. The Mass, which was not presided over by Pope Francis as he follows doctors’ advice to rest his knee, concluded with a procession of the Blessed Sacrament and was followed by the Benediction. 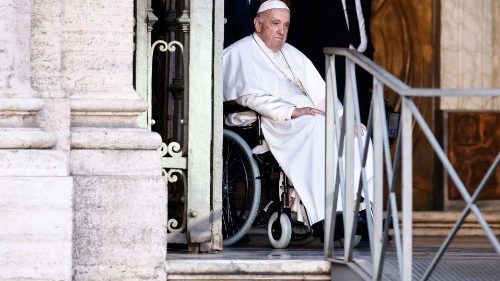 Pope not to preside at Corpus Christi Mass due to knee

Cardinal Gambetti explained that the fact that Jesus came down from heaven shows how the Father’s love for humanity was manifested in “lowering” His Son who descended from heaven and died on the cross for our salvation.

It tells us “in no uncertain terms, that “coming down, or ‘lowering’ is the way of God,” he said, adding that if we do not understand and accept this “we risk separating ourselves” from the way to eternal life and from Jesus.

As we have heard in the Gospel, Cardinal Gambetti said, “Jesus takes us by the hand to accompany us, allowing us to discover, to the very end, the way to eternal life and to help us be a part of it.”

The many episodes which tell of how Jesus “fed the crowds” are central in the narratives of all the Evangelists and have remained etched in the memory of the disciples. They set in motion, the Cardinal explained, “a process of conversion that became a path of transformation,” beginning with Easter - that Last Supper – in which we too participate, “every time, like today, we celebrate the Eucharist.”

Resist the temptation of logical reasoning

That path of transformation requires us to change our worldly mindset, he added, and demands that we face the challenges of history and the suffering of our brothers and sisters, while resisting the temptation to justify our indolence or helplessness with logical reasoning or hypothetical “solutions.”

“We have to admit we resist involvement when it touches us in the flesh, in our pockets, in the privileges we enjoy.”

“The main problem, however, is that we have little faith,” he said. “It’s as if the disciples had told Jesus: it is impossible to accomplish what you asked of us, you have overrated us or you don’t know what you are saying.”

“We need to be careful,” the Archpriest continued, “and instead of looking for justifications not to become involved” we need to ask ourselves: “what is the Lord asking me to do in this situation? And then simply, obey.”

That’s what the disciples did, he said “and the unbelievable happened!” What’s more, it was a turning point in the journey of the disciples.

The school of Corpus Christi

“We are called to become Eucharist, like Jesus, who repeats to us: “Do this in remembrance of Me.”

When we celebrate the Eucharist, the memorial of the Lord's death, Cardinal Gambetti said, we do not intend only to remember,  we prepare ourselves to become living memory of Jesus.

“This is the school of Corpus Christi,” the Cardinal concluded, inviting the faithful to “lower themselves” and allow Jesus to take them by the hand and lead them in a full and loving life that comes from a change of mindset and of attitude.

“Don't worry about yourselves anymore, but care for your brothers and sisters: give of yourselves to feed them, just as Jesus did.”

Posted by Deacon Mike Talbot at 9:18 AM