A great story from World Meeting of Families 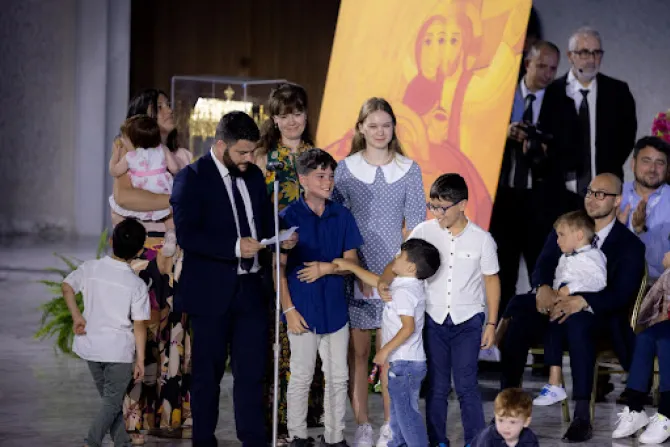 The Chiriaco family share their story at the World Meeting of Families, June 22, 2022. | Daniel Ibanez/CNA.

As millions of refugees fled the war in Ukraine this year, a Catholic family of eight made the decision to welcome a refugee family into their home.

Pietro and Erika Chiriaco live in Rome with their six children. The couple explained to their children during family prayer time that welcoming a refugee family would be “like welcoming Jesus.”

This is how Iryna and Sofia, a mother and her 17-year-old daughter from Kyiv, came to live in the Chiriaco family in the southern outskirts of Rome.

The pair left the Ukrainian capital 10 days after the Russian invasion of Ukraine and eventually took a bus to Italy.

“The decision to leave was not easy,” Iryna said.

“Today I thank God because he sent so many good people in our path,” she added.

Iryna and Sofia shared their story with the pope alongside the Chiriaco family on the stage of the World Meeting of Families, which is taking place in Rome June 22-26.

The Chiriacos said that they made the decision to host the Ukrainian refugees out of gratitude to God. Erika Chiriaco added that the presence of the Ukrainian mother and daughter in their home has been a “blessing from heaven.”

Pope Francis thanked the family for their generosity and for witnessing to what it means to be a “welcoming family.”

“We may think that, in a large home, it is harder to welcome other people; yet that is not the case, for families with numerous children are trained to make room for others. They always find space for others.”

The pope added that a family is the place where a person “experiences what it is to be welcomed.” He said that this can be seen when a family welcomes the life of a child with a disability, welcomes a relative facing difficulties, or welcomes an elderly person in need of care.

The organizers of the 10th World Meeting of Families are encouraging families to participate virtually in this Catholic tradition started by St. John Paul II by tuning into media broadcasts and live streams of the speeches and catecheses.

Pope Francis thanked Iryna and Sofia for sharing their witness to faith amid human brutality at the World Meeting of Families.

“You gave a voice to all those persons whose lives have been devastated by the war in Ukraine,” he said.

“In you, we see the faces and the stories of so many men and women forced to leave their homeland. We thank you, for you have not lost your trust in providence and you have seen how God is at work in your lives, not least through the flesh and blood people he led you to encounter.”