Will there be protests this weekend when you attend Mass?

A pro-choice group called Ruth Sent Us, named after late liberal Justice Ruth Bader Ginsburg, is urging followers on Twitter to “rise up against a corrupt and illegitimate” Supreme Court in the wake of Monday’s bombshell leak of a draft opinion that could end nationwide abortion rights.

“Whether you’re a ‘Catholic for Choice,’ ex-Catholic, of other or no faith, recognize that six extremist Catholics set out to overturn Roe,” the group tweeted Tuesday. “Stand at or in a local Catholic Church Sun May 8. #WarOnWomen #MothersDayStrike.”

The tweet also featured a video of activists in “The Handmaid’s Tale” outfits — likening the looming potential abortion ban to Margaret Atwood’s dystopian novel where women are treated as property of the state.

“Without this basic right, women can’t be free!” they chanted. “Abortion on demand and without apology!”

The group also challenged others to follow in their footsteps.

“Do you dare to chant in your local churches?” a message in the footage read. “Comment below, we’ll send you safety tips.”

The group’s website urges people to sign up to “rise up” against the “extremist” Supreme Court and shockingly posted the private home addresses of the six conservative justices.

Another group, Rise Up 4 Abortion Rights, is organizing a “Week of Resistance” beginning on Mother’s Day through May 14 — culminating with protests in New York, Chicago and Seattle.

“Several cities will be hosting protests outside prominent churches in their towns,” its website states on its planned Mother’s Day events. “These can look like a group of people holding signs wearing Handmaid’s Tale outfits, passing out flyers outside to church goers or doing a die-in.”

The group also specifically targeted mothers in their push, urging them to take part in the peaceful protests while using tags on social media like #MothersDay and #RiseUp4AbortionRights.

“Motherhood should be a choice, not forced by the church or the state,” the group claims. “Forced Motherhood is Female Enslavement!” 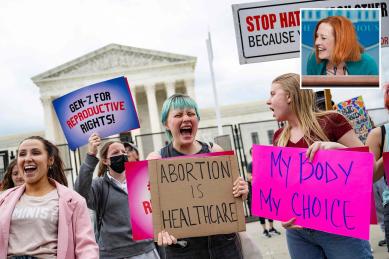 The activists’ call to action comes after Monday’s leak, which Chief Justice John Roberts blasted as “absolutely appalling” while promising that the disclosure won’t stop the high court’s work.

The leak also led to protests outside the Supreme Court in Washington, DC, where a non-scaleable fence was erected late Wednesday.

The draft opinion was written by Justice Samuel Alito. If ultimately adopted by a majority of the nine justices, it would uphold a Mississippi law banning abortion after 15 weeks of pregnancy — as well as overturn the landmark 1973 ruling in the Roe v. Wade case that legalized abortion nationwide.

It would also reverse a 1992 decision that reaffirmed the Roe v. Wade resolution.

A ruling is expected by June.

When pressed that some of the justices have young children, Psaki was unmoved.

“I think our view here is that peaceful protests — there’s a long history in the United States in the country of that,” she said. “And we’ve certainly encouraged people to keep it peaceful and not resort to any level of violence.