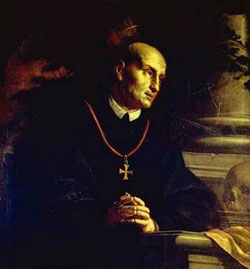 Abbot A member of a noble family in Auvergne, France, he entered the Benedictine monastery of Cluny about 990 and received election as abbot in 994. He was beloved and respected throughout Europe for his deep austerities and his concem for the poor. In 1006, he even sold treasures of the Church to feed the poor during a famine. Through his efforts, the monasteries belonging to Cluny increased from thirty seven to sixty five. He also helped bring about the Truce of God and the feast of All Soul's Day, and was a trusted advisor to popes and kings. He was devoted to the Blessed Virgin Mary and to the Incarnation. Fulbert of Chartres called him Archangelus Monachorum, Archangel of Monks. Odilo died on January 1 while touring his monasteries.