The Saint of the Alps 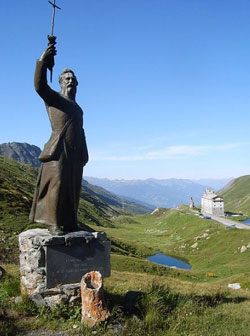 Bernard of Montjoux was probably born in Italy. He became a priest, was made Vicar General of Aosta, and spent more than four decades doing missionary work in the Alps. He built schools and churches in the diocese but is especially remembered for two Alpine hospices he built to aid lost travelers in the mountain passes named Great and Little Bernard, after him. The men who ran them in time became Augustinian canons regular and built a monastery. The Order continued into the twentieth century. He was proclaimed the patron saint of Alpinists and mountain climbers by Pope Pius XI in 1923. He is sometimes fallaciously referred to as Bernard of Menthon and the son of Count Richard of Menthon, which he was not. His feast day is May 28th.

Bernard became patron and protector of skiers because of his four decades spent in missionary work throughout the Alps.