The Church continues her work against human trafficking

Meeting participants of the Santa Marta Group Conference, Pope Francis thanks them for their ongoing commitment in the fight against the scourge of human trafficking.

Pope Francis on Thursday met with participants in the Santa Marta Group Conference, as they concluded their three-day meeting on human trafficking at the Pontifical Academy for Social Sciences in the Vatican's Casina Pio IV.

The group, led by Cardinal Vincent Nichols, Archbishop of Westminster, was established in 2014 to pledge closer cooperation on anti-trafficking initiatives between the Catholic Church and law enforcement agencies worldwide, as this scourge continues to grow and greater numbers of vulnerable people are falling prey to criminal organizations.

It was named after the Papal residence where the participants from the Vatican Conference stayed in April 2014 and resulted in a signed ‘Declaration of Commitment’ by all the Chiefs of Police present to work together on the international stage to develop strategies in prevention, pastoral care and the re-integration.

Since that first event, police chiefs, civil society leaders, bishops, and religious sisters have met regularly to share experiences and good practices. They also seek to strengthen cooperation on the international, national and local so as to improve and better enforce existing legislations against human trafficking, which Pope Francis has described "a crime against humanity” and “a wound on the body of Christ”.

This week's meeting was the first in person gathering in three years following the Covid-19 pandemic.

Discussions concentrated on how to re-focus and revitalize activities in light of a worsening situation across the world caused by the pandemic and continuing conflict and instability in many regions of the world, including now Ukraine.

Its aim was to produce a new action plan to help guide local and regional activity, which was presented to Pope Francis during Thursday's audience closing the conference.

Addressing participants, the Holy Father once again thanked the Santa Marta Group for its ongoing commitment in seeking to eradicate this criminal activity “that violates the dignity and rights of men, women and children and leaves long-lasting effects upon individual victims and the broader society.”

He noted that modern forms of slavery continue to spread, even within the most developed areas of our world. 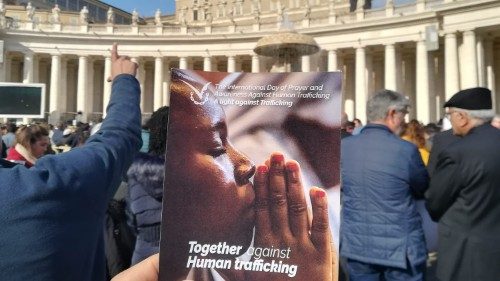 Focusing on the person

He also expressed hope that the fight against human trafficking will take into greater consideration a number of broader realities, including “the responsible use of technology and social media, as well as the need for a renewed ethical vision of our political, economic and social life, one centred not on profit but on persons.”

The Pope concluded by stressing the essential need “to support, accompany and reintegrate the victims”, and to “assist them in the process of healing and the recovery of their self-esteem.”

"Although the task is indeed daunting, I encourage you to persevere in your efforts to uphold the God-given dignity of every person and to defend the fundamental human rights of those who are all too often forgotten and have no voice”, he said.

“[ The Church remains grateful for every expression of fraternal charity and care shown to all who have been enslaved and exploited, for in this way, God’s loving mercy becomes visible and the fabric of society is strengthened and renewed. ]   ”

Posted by Deacon Mike Talbot at 9:54 AM