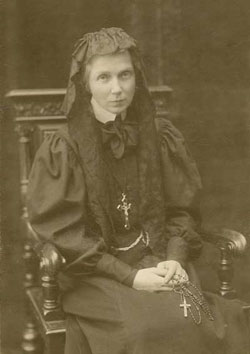 Julia Maria Ledóchowska was born in Austria in 1865, the daughter of a Polish count and a Swiss noblewoman. Her large family was a school of saints. Her uncle, Cardinal Mieczyslaw Ledóchowski, the Primate of Poland, was persecuted and imprisoned for his opposition to the policies of the Prussian Kulturkampf ["culture war"]. Her older sister, Blessed Maria Teresa Ledóchowska, founded the Missionary Sisters of S. Peter Claver and is affectionately known as the "Mother of Black Africa".

Julia Maria moved with her family to Poland when her father became ill in 1883. He died soon after, having given his blessing to her plans to enter the Convent of the Ursuline Sisters in Krakow. Julia took the religious name of "Maria Ursula of Jesus" and devoted herself to the care and education of youth. She organized the first residence in Poland for female university students.

As prioress of the convent after the turn of the century, she received a request to found a boarding school for Polish girls in St. Petersburg, Russia, then a cosmopolitan, industrial city. The pastor of St. Catherine's Church, Msgr. Constantine Budkiewicz (a Polish nobleman), extended the invitation, and Pope St. Pius X gave his approval. So in 1907 Mother Ursula went with another sister to Russia to found a new convent and work among the Catholic immigrants. Although the nuns wore lay clothing, they were under constant surveillance by the secret police.

At the beginning of World War I, Mother Ursula was expelled from Russia as an Austrian national. The Monsignor would be martyred by the Bolsheviks, and St. Petersburg would eventually be renamed "Leningrad".

Mother Ursula fled to neutral Sweden. She organized relief efforts for war victims and charitable programs for Polish people living in exile, founded a monthly Catholic newspaper, and made extensive ecumenical contacts with Lutherans in Scandinavia.

In 1920 M. Ursula, her sisters, and dozens of orphans (the children of immigrants) made their way back to Poland. During the tumultuous years that they had spent abroad, the growing Ursuline community had developed a distinctive charism and apostolate. Therefore Mother Ursula founded her own Congregation, the Ursuline Sisters of the Heart of Jesus in Agony. Her brother Vladimir, who had become Superior General of the Jesuits, helped to obtain Vatican approval of the new institute, which was to be devoted to "the education and training of children and youth, and service to the poorest and the oppressed among our brethren" (from the Constitutions).

Between the two world wars, M. Ursula and her nuns taught catechism in the enormous factory town of Lodz. She organized a "Eucharistic Crusade" among the working-class children, encouraging those little "Knights of the Crusade" to write to Pope Pius XI in honor of the fiftieth anniversary of his priestly ordination. Some children wrote that they loved the Holy Father as much as their own parents. Others spoke of receiving Our Lord in their First Holy Communion, of wanting to be His apostles and missionaries. One child wrote: "How beautiful it would be if the Holy Father were to come to Poland." Mother Ursula Ledóchowska died on May 29, 1939 at the general house of her community in Rome.

Pope John Paul II beatified her during his second pastoral visit to Poland, in 1983, the Holy Year of Redemption and the sixth centenary of Our Lady of Jasna Gora, in the city of Poznan, with schoolchildren from Lodz in attendance.

While visiting his homeland in June 1983, the Holy Father spoke the following words: "It is the Saints and the Blessed who show us the path to the victory that God achieves in human history. Every individual is called to a similar victory. Every son and daughter of Poland who follows the example of her saints and beati. Their elevation to the altars in their homeland is the sign of that strength which is more powerful than any human weakness and more powerful than any situation, even the most difficult, not excluding the arrogant use of power."

Less than a decade later, in 1991, when Pope John Paul II returned to Poland to beatify Bishop Pelczar, Solidarity had prevailed, the Berlin Wall had fallen, and the Catholic hierarchy had been restored in most Eastern European nations.