Pope Francis underscores the dignity of work for all

Following the Regina Coeli on Sunday - the Feast of St. Joseph the Worker - Pope Francis recalled the dignity of work for all. He also paid tribute to two newly beatified in Milan, and remembered journalists who paid with their lives covering world events as May 3rd marks World Press Freedom Day.

At the conclusion of Sunday's Regina Coeli, Pope Francis recalled that May 1st, the feast of St Joseph the Worker, is the day the Church remembers the world of labour. He prayed that we might renew our commitment "that work may be dignified everywhere and for everyone." May this day also help "inspire the will to develop an economy of peace," he said, as he remembered the workers who have died on the job, calling it "a widespread tragedy." 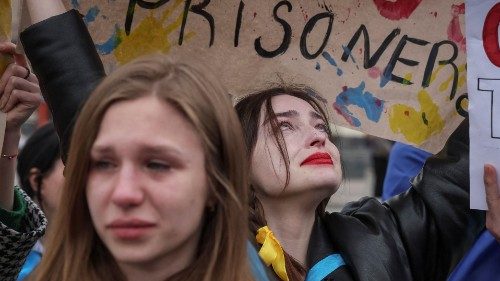 Pope "grieves" for suffering people of Ukraine, appeals for prayers

Pope at Regina Coeli: May we rediscover the impulse to do good

The Holy Father also noted the beatification, in Milan on Saturday, of Fr. Mario Ciceri and Armida Barelli. The Pope recalled how Fr. Ciceri served as a country parish priest, devoted to prayer and hearing confessions, and noted that he is remembered as a gentle educator and guide for young people, "a shining example of a pastor."

Armida Barelli, the Pope explained, was the founder and animator of the Women's Youth of Catholic Action, a role that saw her travelled throughout Italy to bring young women to the Church and to civil service. She worked with Franciscan Father Agostino Gemelli to establish a secular women's institute and the Sacred Heart Catholic University, the Pope said, noting that the University today is celebrating its anniversary by honouring her in a special way. The Pope invited the crowds in the Square to give a round of applause for the new Blesseds.

And finally, the Pope also mentioned that 3 May marks World Press Freedom Day, sponsored by UNESCO. The Pope paid tribute to journalists who have lost their lives in the service they offer covering world events for us, recalling that last year 47 journalists were killed and more than 350 imprisoned globally. He thanked journalists "who courageously inform us about the scourges of humanity."