For her full throated support for killing babies and blatant disregard for Catholic teaching on MANY issues, Nancy Pelosi is formally banned by her Bishop from Holy Communion 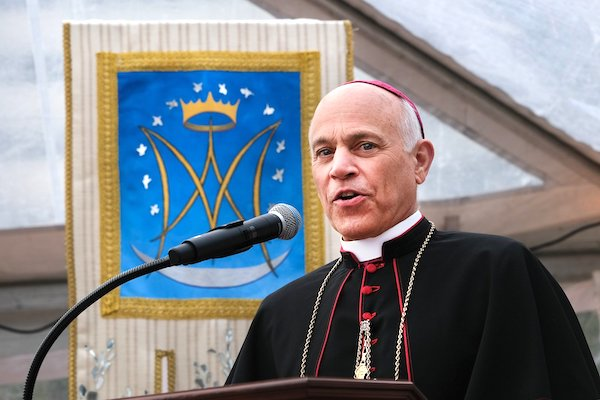 My Dear Brothers and Sisters in Christ:

Pope Francis has been one of the world’s most vocal advocates of human dignity in every stage and condition of life.  He decries what he evocatively calls the “throwaway culture.”  There can be no more extreme example of this cultural depravity than when direct attacks on human life are enshrined in a nation’s law, celebrated by society, and even paid for by the government.  This is why Pope Francis, as much as any pope in living memory, has repeatedly and vividly affirmed the Church’s clear and constant teaching that abortion is a grave moral evil.

Surely no Pope has spoken more eloquently than Pope Francis did in the earliest days of his Pontificate, saying on September 20, 2013:

In a frail human being, each one of us is invited to recognize the face of the Lord, who in his human flesh experienced the indifference and solitude to which we so often condemn the poorest of the poor, whether in developing countries or in wealthy societies.  Every child who, rather than being born, is condemned unjustly to being aborted, bears the face of Jesus Christ, bears the face of the Lord, who even before he was born, and then just after birth, experienced the world’s rejection.

Another valuable insight Pope Francis gives us is that of the inter-connectedness of all of the threats to human dignity in the throwaway culture.  As one clear example, in his landmark 2015 Encyclical on the environment, Laudato Si’, he underscored that care for our common home includes care for the weakest among us, including the unborn child:

When we fail to acknowledge as part of reality the worth of a poor person, a human embryo, a person with disabilities – to offer just a few examples – it becomes difficult to hear the cry of nature itself; everything is connected.  Once the human being declares independence from reality and behaves with absolute dominion, the very foundations of our life begin to crumble, for ‘instead of carrying out his role as a cooperator with God in the work of creation, man sets himself up in place of God and thus ends up provoking a rebellion on the part of nature.’

As the Archbishop of San Francisco, I am bound to be “concerned for all the Christian faithful entrusted to [my] care” (Code of Canon Law, can. 383, §1).  This most serious duty can sometimes become unpleasant, especially when Catholics in public life explicitly promote practices that involve the direct taking of innocent human life, which is what abortion does.  I have struggled with this issue in my own conscience for many years now, especially with regard to the Speaker of the U.S. House of Representatives and member of our Archdiocese, Nancy Pelosi.

I have received letters from very many of you over the years expressing distress over the scandal being caused by such Catholics in public life who promote such grievously evil practices as abortion.  I have responded that conversion is always better than exclusion, and before any such action can be taken it must be preceded by sincere and diligent efforts at dialogue and persuasion.  With regard to Speaker Pelosi, I have striven to follow this wise route, as delineated by then-Cardinal Ratzinger (later Pope Benedict XVI) in a letter to U.S. bishops regarding Holy Communion and Catholic politicians who cooperate in the grave evils of abortion and euthanasia:

… when a person’s formal cooperation becomes manifest (understood, in the case of a Catholic politician, as his consistently campaigning and voting for permissive abortion and euthanasia laws), his Pastor should meet with him, instructing him about the Church’s teaching, informing him that he is not to present himself for Holy Communion until he brings to an end the objective situation of sin, and warning him that he will otherwise be denied the Eucharist.  When ‘these precautionary measures have not had their effect …,’ and the person in question, with obstinate persistence, still presents himself to receive the Holy Eucharist, ‘the minister of Holy Communion must refuse to distribute it.’[3]

This instruction is in accordance with canon 915 of the Code of Canon Law, which stipulates, “Those … obstinately persevering in manifest grave sin are not to be admitted to Holy Communion.”  In the pastoral letter I issued a year ago, Before I Formed You in the Womb I Knew You, I laid out the Church’s teaching on cooperation in evil, especially that of abortion, and the proper disposition for receiving Holy Communion, precisely to help our people better understand these principles and what is at stake here.

Unfortunately, Speaker Pelosi’s position on abortion has become only more extreme over the years, especially in the last few months.  Just earlier this month she once again, as she has many times before, explicitly cited her Catholic faith while justifying abortion as a “choice,” this time setting herself in direct opposition to Pope Francis: “The very idea that they would be telling women the size, timing or whatever of their family, the personal nature of this is so appalling, and I say that as a devout Catholic”; “They say to me, ‘Nancy Pelosi thinks she knows more about having babies than the Pope.’  Yes I do.  Are you stupid?”

After numerous attempts to speak with her to help her understand the grave evil she is perpetrating, the scandal she is causing, and the danger to her own soul she is risking, I have determined that the point has come in which I must make a public declaration that she is not to be admitted to Holy Communion unless and until she publicly repudiate her support for abortion “rights” and confess and receive absolution for her cooperation in this evil in the sacrament of Penance.  I have accordingly sent her a Notification to this effect, which I have now made public.

Please know that I find no pleasure whatsoever in fulfilling my pastoral duty here.  Speaker Pelosi remains our sister in Christ.  Her advocacy for the care of the poor and vulnerable elicits my admiration.  I assure you that my action here is purely pastoral, not political.  I have been very clear in my words and actions about this.  Speaker Pelosi has been uppermost in my prayer intentions ever since I became the Archbishop of San Francisco.  It was my prayer life that motivated me to ask people all around the country to join me in praying and fasting for her in the “Rose and Rosary for Nancy Campaign.”  I especially pray that she will see in the roses she has received a sign of the honest love and care that many thousands of people have for her.

I very sincerely thank all of you who have participated in this campaign, and all others who have otherwise prayed and made spiritual sacrifices for our Speaker, and I ask you to continue (or start) to do so.  I also ask you actively to support with your time, talent and treasure the efforts of pro-life advocates to accompany women in crisis pregnancies and offer them the support they need to make a choice for life, as well as those who have been scarred by the abortion experience (for our local efforts, see: https://sfarchdiocese.org/standwithmoms).

This is what it means to be truly pro-life.  It is the way of love.

May God grant us the grace to be true advocates for the dignity of human life, in every stage and condition of life, and to accompany, support and love women who otherwise would be alone and afraid at a most vulnerable time in their lives.

In Christ, our Source of New Life,