Brazen theft of a tabernacle in Brooklyn 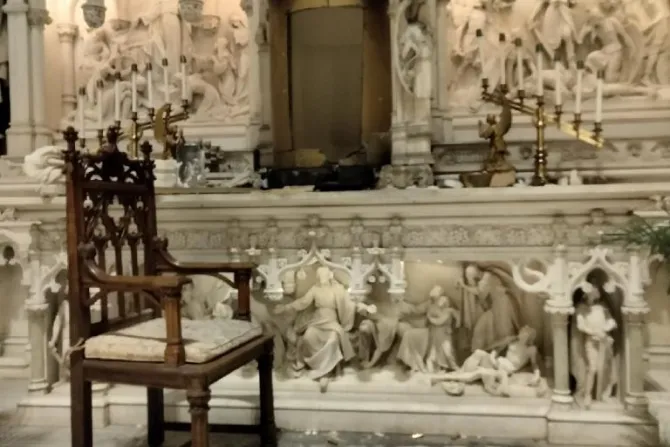 A tabernacle has been stolen from St. Augustine Catholic Church in the Park Slope neighborhood of New York City’s Brooklyn borough.

The Diocese of Brooklyn said May 29 that “the Holy Eucharist housed inside the Tabernacle was thrown all over the altar.”

The burglary was discovered by Father Frank Tumino, pastor of St. Augustine parish, on the afternoon of May 28; it is suspected to have taken place the previous day.

“This is devastating, as the Tabernacle is the central focus of our church outside of worship, holding the Body of Christ, the Eucharist, which is delivered to the sick and homebound,” Fr. Tumino said. “To know that a burglar entered the most sacred space of our beautiful Church and took great pains to cut into a security system is a heinous act of disrespect.”

The diocese said that the burglar “cut through a metal protective casing” to take the late 19th century tabernacle, which “is irreplaceable due to its historical and artistic value.”

Police have estimated the tabernacle’s value at $2 million.

The angels on either side of the tabernacle “were decapitated and destroyed.”

A safe in the sacristy was cut open, the diocese added, but it was empty.

The Tablet, the Brooklyn diocese’s publication, reported that while St. Augustine’s has security cameras, “the burglars apparently made off with some components of the video recording system.”