An inside look at the Pontifical Swiss Guard

Pope Francis greets the officers and members of the Pontifical Swiss Guards, and encourages the troops sworn in to protect the Pope in their duty to build community in service and to discover God’s vocation for their lives.

May 6th is an important date in the life of the Pontifical Swiss Guards, since it marks the date when 147 of their predecessors were killed while protecting Pope Clement VII during the Sack of Rome in 1527.

Each year on this day, new recruits swear an oath of allegiance and officially begin their service in the employ of the Holy Father.

Pope Francis met with the Swiss Guards on Friday to celebrate with them what he called “a beautiful occasion.”

In his address to the Guards and their families, the Pope extended his special greetings to the new recruits who will be sworn in at a ceremony later on Friday evening.

He said they are devoting a few years of their lives to “a task which is both fascinating and full of responsibility in the heart of the universal Church.”

“Through a generous and faithful commitment, over the centuries some men have not shirked the hardest trials, going so far as to shed their own blood to defend the Pope and to enable him to carry out his mission in full independence.”

The Pope added that Swiss Guards serve with “supreme dedication” to ensure the “security of the Pope and of his residence.” 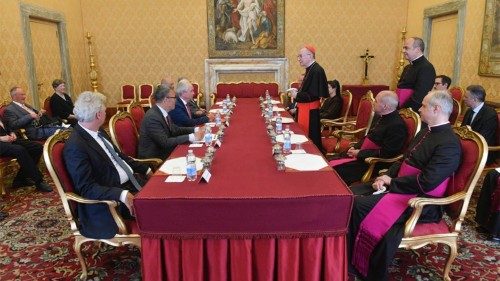 Pope Francis encouraged the new recruits in their decision to embark on an “exquisitely ecclesial task,” which must be lived “as a Christian and communal witness.”

The Swiss Guards serve as a community and not individually, said the Pope, urging them to embrace community life in every moment of their day.

“Living service in a community is a challenge,” he said, “because it involves bringing together individuals with different personalities, temperaments and sensibilities, who find themselves walking a stretch of road together.”

Yet, added the Pope, the Guards are motivated by the “ideal of serving the Church”, which helps them face moments of difficulty when they arise.

The Holy Father also invited the new Swiss Guards to devote time to formation, and to allow themselves to grow as Christian men.

“Your stay in Rome should be valued in order to grow as Christians. I am thinking of the spiritual life, which enables us to discover God's plan for each of us.”

At the same time, the Pope called them to cultivate healthy friendships with their brother Guards, in a spirit of “sincere and fraternal dialogue.”

Pain for death of Swiss Guard

The Pope spoke off-the-cuff for a moment to recall a young Guardsman who died recently.

“I would like to pause for a moment in pain and sadness,” he said. “And I would wish that your colleague Silvan Wolf were here present. Unfortunately, he has died, a good, joyful young man. An accident (‘incidente’: in Italian) took him away from us. In silence, let us recall Silvan and pray for him.

Pope Francis wrapped up his speech by praising the Swiss Guards for their “punctual and precious collaboration,” which he said he witnesses every day.

“The Holy See counts on you!” he said. “Vatican City is proud of your presence in its territory!”

And the Pope entrusted the Guards to the intercession of the Blessed Virgin Mary, along with their patrons Sts. Martin and Sebastian.