Ukraine Archbishop says ""The enemy is killing us, he wants to take everything from us." 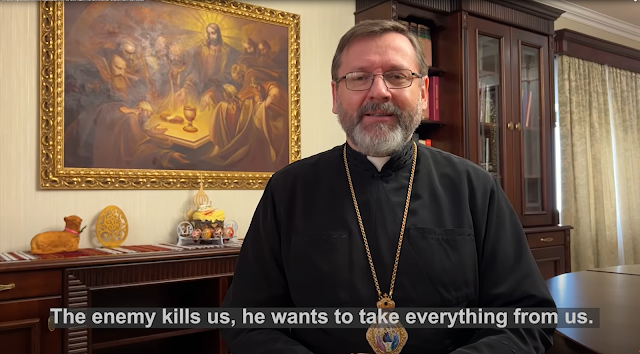 But Ukraine is worth it! Ukraine is fighting! Ukraine is praying! And Ukraine celebrates Easter! ” - stated the Primate."During the last night and the last day, the enemy again fired missiles almost all over Ukraine. Lviv, Vinnytsia, and Zhytomyr regions trembled under Russian missiles. This morning, a missile strike was carried out in Zaporizhia, where tens of thousands of refugees from Mariupol, southern Ukraine, gathered. Ukrainian Kharkiv is on fire, where a third of the buildings have already been completely destroyed. But the city stands, lives, prays and the Church in Kharkiv serves its people, "the Head of the Church said."Our heroic Mariupol is holding on. In fact, it is held by some force - it amazes people in different parts of the globe. The city of Mary, the city of martyrs, Mariupol protects its children and women. Protects Ukraine! ” He added.The Father and the Head noted that, despite these disasters of the war, a strange force is growing in the heart of the Ukrainian people, which, apparently, does not come from people. For in the face of such an armed, cruel, murderous enemy, the human heart would probably be frightened and hands down. "However, this power, which is becoming more and more evident, is calling our people to freedom through God's action. Calls not to be afraid. Calls to fight. He calls not to be afraid to do good, "the bishop stressed.The Primate is convinced that Ukrainians are not in vain experiencing these tragedies during Easter. We feel, he says, that the risen Christ is miraculously among us in Ukraine today. According to him, we feel that the power of the Risen One works in us through the grace of our Baptism. For we, having been baptized into the power of Christ, having entered into His death and resurrection through the Sacrament of Baptism, carry the life of the Risen One in our bowels.So His Beatitude Sviatoslav offered to reflect today on the heart of Christ's preaching, on the Beatitudes. He explained that the blessed are those who already carry in themselves this life-giving germ of resurrection that we received in Jesus Christ.No wonder, says the Head of the UGCC, the first of the Beatitudes are the words of Christ: "Blessed are the poor in spirit, for theirs is the Kingdom of Heaven." He who is baptized into Christ carries within him the power of His resurrection. He feels that the treasure of the embryo of the Kingdom of Heaven, which we already have in ourselves, no one will be able to take away from us."The enemy is killing us, he wants to take everything from us. But we are rich in Christ's riches, His life, and His resurrection. And we want to share this wealth of ours with everyone. We, Ukrainians, want to experience this bliss today - to be poor in spirit, but rich in the Kingdom of Heaven, which is already in us and among us. That is why we say to ourselves and to the world: "Christ is risen! He is truly risen!", - added the spiritual leader of Ukrainians.