The plight of Ukraine a focus of the Pope's Angelus Address

During the Angelus in Floriana, Malta, Pope Francis asks everyone to pray for peace as the war wages on in 'martyred Ukraine'

Pope Francis has decried the "sacrilegous war" as bombardments continue in "martyred Ukraine."

During his Sunday Angelus in Floriana, Malta, after the Mass, the Pope entrusted Ukraine to Mary and asked all faithful to pray for peace "thinking of the humanitarian tragedy of the martyred Ukraine, still under the bombings in a sacrilegious war."

The war in Ukraine wages into its second month, as millions have had to flee their homes, especially women and children, to nearby countries, and thousands have died since the Russian invasion.

In latest news, Ukraine says its forces have retaken areas around Kyiv. Evidence of mass killings of Ukrainian civilians has reportedly surfaced while news of continuing shelling of the strategic cities of Odesa and Mariupol is hindering efforts to evacuate survivors. Russia says it is too early for more peace talks. 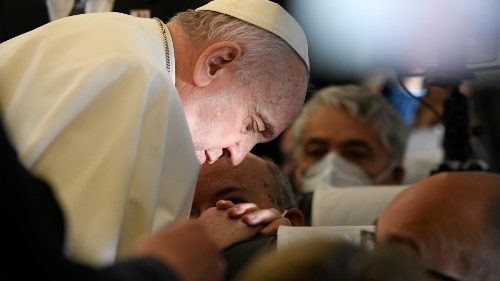 Pope at Mass in Malta: With Jesus, a new different life is always possible

On the papal flight Saturday, the Holy Father told a reporter who asked whether he was considering the offer to travel to Kyiv, that the possibility is on the table.

Pope Francis, in these weeks, has expressed the Holy See's availability to help in any way possible to bring an end to this war.

During his address, the Pope also thanked the Maltese people and Church, and gave words of encouragement to young people.