Pope joins U.N. in calling for easter truce in Ukraine

Pope Francis and the Holy See welcome the UN request for a "ceasefire" on the occasion of the celebration of Easter according to the Julian calendar, on 24 April.

"Nothing is impossible for God" are the words contained in a Vatican communiqué, which states that the Holy See and the Pope join the UN appeal for a truce in view of Easter, which, according to the Julian calendar, is celebrated on 24 April.

The request was promoted by the Secretary-General of the United Nations, Antonio Guterres, in agreement with Major Archbishop Sviatoslav Shevchuk, head of the Ukrainian Greek Catholic Church, and was launched on 19 April.

“Easter is a season for renewal, resurrection and hope. It is a time for reflection on the meaning of suffering, sacrifice, death, and rebirth. It is meant to be a moment of unity.”

Speaking to journalists in front of the UN Headquarters in New York on Tuesday, Antonio Guterres noted, “Instead of a celebration of new life, this Easter coincides with a Russian offensive in eastern Ukraine.”

The intense concentration of forces and firepower continues to make the battle more violent, bloody and destructive, he said.

“This cannot be allowed to happen. Hundreds of thousands of lives hang in the balance.”

The UN Chief continued, “Today, I am calling for a four-day, Holy Week humanitarian pause, beginning on Holy Thursday and running through Easter Sunday, April 24, to allow for the opening of a series of humanitarian corridors.”

Humanitarian needs are dire. People do not have food, water supplies, to treat the sick, or simply to live day-to-day. 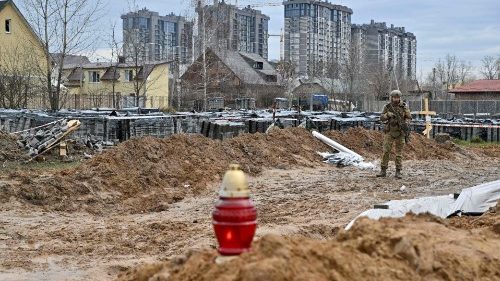 For all these life-or-death reasons, he said, “I call on Russians and Ukrainians to silence the guns and forge a path to safety for so many at immediate risk.” The four-day Easter period should be a moment to unite around saving lives and furthering dialogue to end the suffering in Ukraine.

Antonio Guterres said that inspired by Holy Week and all that it represents, he urges all parties and all champions of peace around the world to join his Easer appeal:

“Save lives. Stop the bloodshed and destruction. Open a window for dialogue and peace. Keep faith with the meaning and the message of Easter.”

On Palm Sunday, Pope Francis had called for an Easter truce to achieve peace saying, “Put the weapons down. Let an Easter truce start. But not to rearm and resume combat but a truce to reach peace through real negotiations open to some sacrifices for the good of the people.”

The Vatican statement further invokes the Lord's protection so that "the population trapped in war zones may be evacuated and peace may soon be re-established"; it also asks "those in charge of the nations to listen to the people's cry for peace."