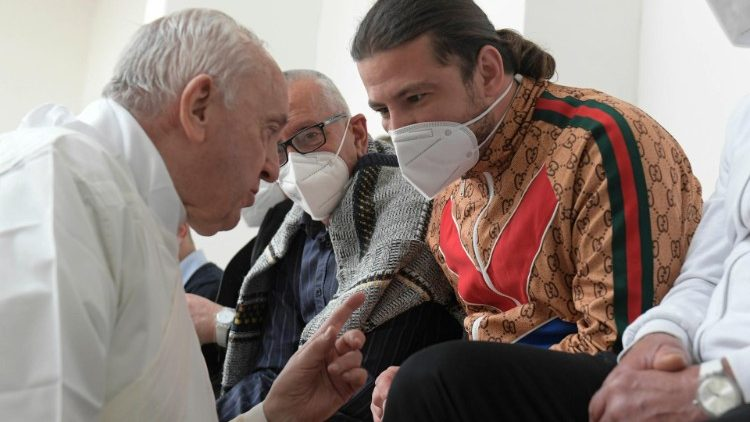 Pope Francis presides over the Mass of the Lord’s Supper on Holy Thursday at a new penitentiary complex in the port city of Civitavecchia, north of Rome, where we he washed the feet of 12 inmates.

Pope Francis presided over the Holy Thursday liturgy In Coena Domini or "Mass of the Lord's Supper," that commemorates the institution of the Holy Eucharist, with inmates housed at the new penitentiary complex of Civitavecchia, a port city north of Rome. He arrived just before 4 pm and was welcomed by the prison authorities who took him to the institution's Chapel where he celebrated the Mass. The celebration took place with some of the inmates, security personnel, prison staff and authorities, including Italy's Minister of Justice.

The Director of the Vatican's Press Office, Matteo Bruni, said in statement that Pope Francis gave a homily where he spoke about the sign of the washing of the feet, part of the liturgy in this celebration, as something seen as "a strange thing" in this world, when we read in the Gospels about "Jesus washing the feet of the traitor, the one who betrayed him." The Pope added that, "Jesus teaches us this, simply, that you must wash each other's feet ... we serve one another, without expecting a return: how beautiful it would be if it were possible to do this every day and to all people."

The Pope went on to say that serving is Jesus saying "friend" to the one who betrayed him, waiting for him until the end, forgiving everything: "God forgives everything and God always forgives! It is we who tire of asking for forgiveness". Each one of us," the Pope said, "will have something that has been in our hearts for a long time, but we ask Jesus for forgiveness". And he recalled "there is the Lord who judges, but it is (what may seem) a strange judgement: the Lord judges and forgives". The Pope concluded by exhorting people to follow this example, with "the desire to serve and forgive each other".

Following his homily, Pope Francis carried out the traditional gesture of Jesus at the Last Supper, when He washed the feet of his Disciples as a sign of his love reflecting the importance of service and humility. The Pope washed the feet of 12 inmates, men and women, including people of various ages and nationalities.

At the end of the Mass, the prison director thanked the Holy Father and offered him a print of the ancient port of Civitavecchia, as well as a selection of products from the vegetable garden managed by the inmates and some works made by staff and inmates.

The Press Office statement concluded noting that, after the celebration, the Pope went to  a room where he briefly greeted about fifty people representing the inmates, officers and staff of the prison. He returned to the Casa Santa Marta shortly afterwards.