Pope Francis meets and prays with the sick in Malta 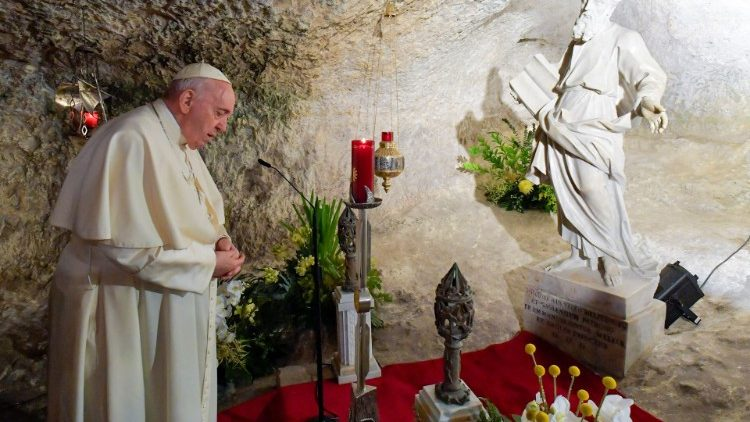 Pope Francis prays at St. Paul's Grotto in Rabat, and prays at one of Malta's most venerated sites, where the Apostle to the Gentiles is believed to have stayed for three months and baptized the land's first Christians.

After meeting privately with a group of Jesuits in the Nunciature, Pope Francis began his second day's Apostolic journey to Malta on Sunday with a visit to St. Paul’s Grotto, in Rabat, where he stopped to pray the Apostle, greeted religious leaders, and met a group of sick persons.

Tradition has that the Apostle stayed here three months after shipwrecking on the island on his way to Rome and preached, baptized and healed the sick sowing the seeds of Christianity in Malta.

The site, which is believed to have miraculous qualities, was also visited by Pope St. John Paul II, and Pope Benedict XVI during their Apostolic Journeys to the island country.

Upon his arrival at St. Paul’s Basilica where the grotto is located, Pope Francis was welcomed by the Archpriest Fr. Joseph Mizzi, and the Chapter of the Collegiate Church.  He was accompanied amongst others by Archbishop Charles Jude Scicluna, of Malta.

Awaiting him was also a festive crowd of Maltese faithful who welcomed him with waving Vatican flags in the square outside the Basilica.

The Holy Father descended into the grotto to pray before the statue of St Paul, which was donated to the church in 1748 by the Grandmaster of the Order of the Knights of St John (Order of Malta), who at the time owned the place.

“[ God of mercy, in your wondrous providence you wished the Apostle Paul to proclaim your love to the inhabitants of Malta, who did not yet know you. He preached your word to them and he healed their infirmities.”

“Saved from shipwreck, Saint Paul and his fellow travelers found here to welcome them pagan people of kindly heart, who treated them with rare humanity, recognizing that they were in need of shelter, security and assistance.”

“No one knew their names, their place of birth or their social status; they knew only one thing: that these were people in need of help. There was no time for discussions, for judgements, analyses and calculations: it was the time to lend a helping hand: they left their jobs, and did exactly that.”

“They lit a great fire, to dry them and warm them. They welcomed them with open hearts And, together with Publius, first in government and in mercy, they gave them shelter. Good Father, grant us the grace of a kindly heart that beats with love for our brothers and sisters. Help us to recognize from afar those in need, struggling amidst the waves of the sea, dashed against the reefs of unknown shores. ]”

The signing of the Book of Honor

At the closing of the prayer, the Holy Father  signed the Book of Honor writing these words:

“In this sacred place, which remembers Saint Paul, Apostle of the Gentiles and father of the faith of these  people, I thank the Lord and I pray that He will always grant the Maltese people  the Spirit of consolation and the ardor of the announcement.”

As he signed the Book of Honor he was greeted by the Archpriest of the Basilica with an engraved image of St. Paul

Pope Francis  then walked through the Church of St. Publius, in the Basilica premises, where he greeted a group of 14 religious leaders, and subsequently entered the Basilica where he  stopped to pray imploring the Lord to increase the faith of the Maltese people, and imparted his Blessing.

“O God, infinite is your mercy, boundless the riches of your goodness: graciously increase the faith of the people consecrated to you, so that all may grasp and rightly understand the love that created them, the blood that redeemed them, and the Spirit that gave them rebirth. Through Christ our Lord. R/. Amen”

Before leaving the Basilica the Pope met a group of some 20 sick and vulnerable people assisted by the local Caritas,. He then departured on the car leading him to Floriana where he celebrated Mass.

Posted by Deacon Mike Talbot at 10:54 AM