Pope Francis may be headed to Lebanon

Papal visit to Lebanon under consideration

After a tweet by Lebanese President Michel Aoun, the director of the Holy See Press Office says the possibility of an Apostolic Journey of Pope Francis to the Land of the Cedars is being studied.

“It is a possibility that is being studied,” said the director of the Holy See Press Office, Matteo Bruni, in response to a tweet from Lebanese President Michel Aoun regarding the possibility of a trip by the Pope to Lebanon. President Aoun on Tuesday broke the news of a forthcoming visit by Pope Francis to the country of the Cedars on his Twitter account on Tuesday afternoon.

“The Lebanese people have been waiting for this visit for some time to express gratitude to His Holiness for his support, and to thank him for the initiatives he has undertaken for the country and for the prayers he has offered for its peace and stability” Aoun was quoted as saying in the statement from the president’s office.

Pope Francis received the Lebanese president at the Vatican on 22 March. After his meeting audience with the Holy Father, Aoun met the Secretary of State, Cardinal Pietro Parolin, accompanied by Archbishop Paul Richard Gallagher, the Secretary for Relations with States. 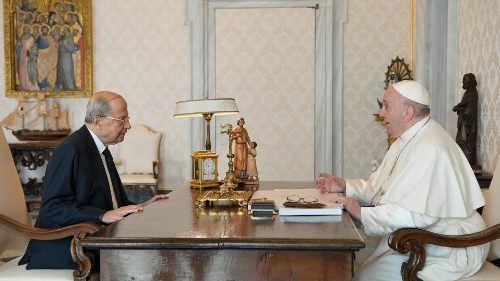 “During the cordial discussions in the Secretariat of State, the importance of the good diplomatic relations between the Holy See and Lebanon, which reach their seventy-fifth anniversary this year, was highlighted,” said a statement of the Holy See Press Office following the encounters. “Attention then turned to the grave socio-economic problems the country is experiencing, and the situation of refugees, in the hope that the aid of the international community, the upcoming legislative elections and the necessary reforms may contribute to strengthening peaceful co-existence between the various religious confessions that live in the Land of the Cedars.” Finally, the statement said, “the disastrous consequences of the explosion at the Port of Beirut on 4 August 2020 were mentioned, with reference to the demand for justice and truth expressed by the families of the victims.”

The Pope’s desire to visit Lebanon

Francis has said several times that he wants to visit Lebanon. One year after the explosion in the port of Beirut, during the General Audience on 4 August, the Pope addressed his thoughts to the entire country, and in particular to the victims, their families, and those who have lost their homes and jobs. He added: “Dear Lebanese friends, I greatly desire to visit you and I continue to pray for you, so that Lebanon will once more be a message of peace and fraternity for the entire Middle East.”

Also in 2021, on 1 July, Pope Francis hosted patriarchs and heads of the Lebanese Eastern Churches for a Day of Reflection and Prayer for Lebanon. And on his return from Iraq, during the in-flight press conference with journalists earlier in the year, on 8 March, Pope Francis revealed that he had promised, in a letter to Cardinal Bechara Raï, to make a trip to Lebanon.

Several Popes have travelled to Lebanon in the past. Pope St John Paul II visited the Land of Cedars in 1997; and was followed by Pope Benedict XVI in 2012. For the latter, it was the last apostolic journey of his pontificate.

But it is worth remembering Pope St Paul VI's stopover in 1964, when he became the first Pope to set foot on Lebanese soil. Pope Paul paused for an hour in Beirut on his way to the Eucharistic Congress in Bombay, India. Welcomed by the President of the Republic, Charles Hélou, and the country's main political and religious authorities, Paul VI gave a short address in French. “Lebanon - it is a pleasure for Us to say this in this place - holds with honour its place in the concert of nations,” the Pope said in his speech at the airport.  “Its history, its culture, the peaceful character of its inhabitants have earned it, it can be said, the esteem and friendship of all. Its ancient and venerable religious traditions, above all, seem to Us to be worthy of mention by Us with praise.” And, he added, “We cannot forget, in particular, all that the faith of the Christian populations of Lebanon represents for the Church, expressed in the harmonious diversity of the Rites, in the abundance and variety of religious and monastic communities, in multiple activities of an apostolic, educational, cultural or charitable nature.”