Papal apology to the indigenous of Canada

The Pope on Friday meets with Canadian Indigenous delegations, expressing his profound sorrow and asking for pardon for the suffering inflicted by some members of the Catholic Church. He also speaks of his intention to visit Canada.

Over the last few days, Pope Francis has been meeting with delegations from Canada’s  First Nations, Inuit, and Métis peoples, hearing their stories about life in the residential school system – a scheme for the forceable integration of indigenous children into Canadian culture by separating them from their families and communities and placing them in boarding schools.

On Friday, Pope Francis met with all three indigenous delegations and had this to say: “For the deplorable conduct of those members of the Catholic Church, I ask for God's forgiveness and I want to say to you with all my heart: I am very sorry.  And I join my brothers, the Canadian bishops, in asking your pardon.”

He told those present that he had listened to their stories. By doing this, the Pope said, he was able to enter into and be deeply grieved by the stories of the suffering, hardship, discrimination and various forms of abuse that some of them experienced, particularly in the residential schools.

“It is chilling to think of determined efforts to instill a sense of inferiority, to rob people of their cultural identity, to sever their roots, and to consider all the personal and social effects that this continues to entail: unresolved traumas that have become intergenerational traumas,” he said.

Pope Francis emphasized that what he had heard had made him feel both indignation and shame.

“Without real indignation, without historical memory and without a commitment to learning from past mistakes, problems remain unresolved and keep coming back.  We can see this these days in the case of war.  The memory of the past must never be sacrificed at the altar of alleged progress,” he said.

The Pope added that he felt shame “for the role that a number of Catholics, particularly those with educational responsibilities, have had in all these things that wounded you, in the abuses you suffered and in the lack of respect shown for your identity, your culture and even your spiritual values.”

During the audience, the three delegations shared with Pope Francis expressions of their own cultures including those through the mediums of song and dance.

Present also was the President of the Canadian Conference of Catholic Bishops (CCCB), Bishop Raymond Poisson who said, “our recent history is marked with the stigma of mistakes and failures to love our neighbour, in particular towards members of those nations who have been present in Canada for centuries. Our desire for reconciliation is all the greater. Our presence here is a testimony to our commitment to one another and to each other.”

In his speech, the Pope touched on a number of topics which ranged from the elderly and future generations, to the care of the land, as well as culture and tradition.

He also turned his attention to those “good and decent believers who, in the name of the faith, and with respect, love and kindness, have enriched your history with the Gospel.” 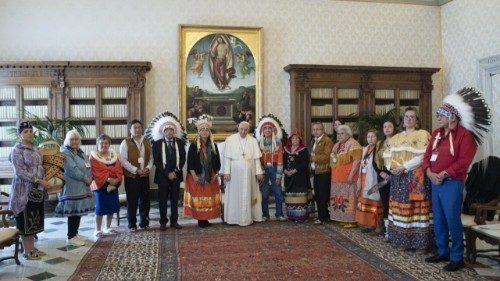 “I think with joy, for example, of the great veneration that many of you have for Saint Anne, the grandmother of Jesus.” And giving a clue to his intention to visit Canada, he said,  “This year I would like to be with you on those days.”

Drawing his address to a close, Pope Francis said he had been enriched by their words and their testimonies. He also said he would be happy to benefit again from meeting them when he visits their native lands, where your families live.”  In another clue to a possible visit, he added, “I won’t come in the winter!  So I will close by saying “Until we meet again” in Canada, where I will be able better to express to you my closeness.”

The Pope ended with a blessing in English: "God bless you all – the Father, the Son and the Holy Spirit. Pray for me, don’t forget! I’ll pray for you. Thank you very much for your visit."

Posted by Deacon Mike Talbot at 9:40 AM