Mass in Ukraine on Easter Sunday

Cardinal Konrad Krajewski, the Papal Almoner, concelebrates Mass on Easter Sunday in the Catholic cathedral in Kyiv, and reminds Ukrainians that Christ has conquered death and so we should never lose hope.

As the Latin rite Church celebrated the great feast of Easter, the Papal Almoner brought the blessings of Pope Francis to the suffering people of Ukraine.

Cardinal Konrad Krajewski took part in the Mass on Easter Sunday in the Catholic Cathedral in Kyiv.

The Mass was presided over by Archbishop Visvaldas Kulbokas, the Apostolic Nuncio to Ukraine, and Bishop Vitalii Kryvytskyi of the Diocese of Kyiv-Zhytomyr.

Rising beyond the pain

The Cardinal recalled his visit on Good Friday to the site of a mass grave in the town of Borodyanka, where over 80 bodies had been buried during the Russian occupation of the area.

Speaking at Easter Sunday Mass, Cardinal Krajewski said our faith must not cease in the face of such horror and pain.

“Christ had to rise, because otherwise we would have remained in a perpetual Good Friday. If we stopped and stayed only at suffering and sin, humanly-speaking there would have been no way out from that situation.”

Yet, continued Cardinal Krajewski, death did not have the last word.

“Thanks be to God there is the Resurrection. When Christ casts aside all evil, there is hope in His blessing.”

The Cardinal then recalled Pope Francis’ words at the Easter Urbi et Orbi, during which he urged everyone to pray for Ukraine. 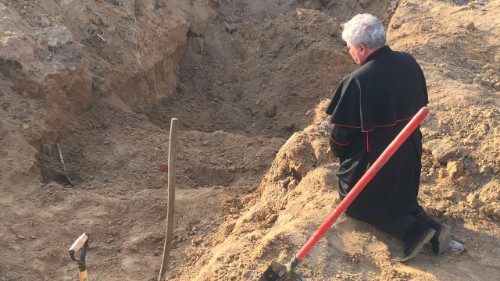 Cardinal Krajewski prays for victims at mass grave in Ukraine

“I bring you the blessing of the Holy Father,” he told the people of Ukraine from the Cathedral in Kyiv. “May peace reign, because Christ has conquered death. He is risen, and we too shall rise.”

“Христос воскрес!” he concluded in Ukrainian. “Christ is risen!”