It happens every year despite our human missteps; they come to join the Catholic Church because Jesus leads them home

‘COVID Catholics’ lean on Eucharist for their strength 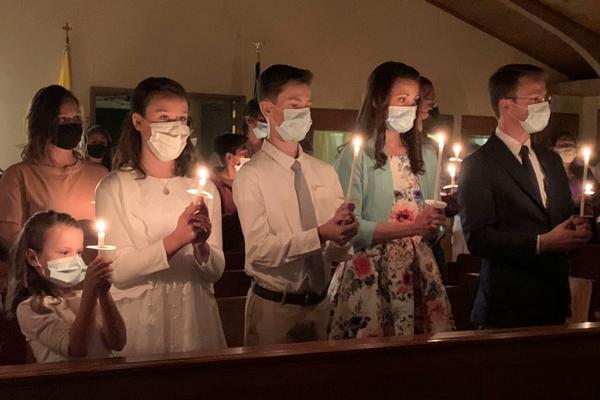 LAURIE RICHARDSON
The Plummer family held lit candles during Easter Vigil April 3, 2021, the night they came into the Church at St. Jude Thaddeus in Waldron. Pictured are children Edie (left), Evilee and Josiah, along with parents Evanie and Trey Plummer.

When the Plummer family walked into St. Jude Thaddeus Church in Waldron in early 2020 for the first time, it was a moment that was about 10 years in the making. From Trey Plummer’s time as a Southern Baptist minister to his wife Evanie’s solid faith upbringing in nondenominational and later Assembly of God churches, they were on a righteous path, but were unsure of the destination. For the high school sweethearts and their three children, they found it in the Eucharist.

“I felt like we found the pearl of great price. This is it,” Trey Plummer said.

The family joined the Church at Easter 2021, finding the beauty of Catholicism despite the COVID-19 pandemic.

“I felt like we found the pearl of great price. This is it.”

Born and raised in Waldron, a farming community of about 3,500 in Scott County, Trey and Evanie grew up together.

The Plummers are celebrating 16 years of marriage this year with children Josiah, 14, Evilee, 12 and Edie, 8, with another girl, Emily, due this summer. Evanie, 36, is a stay-at-home mother, who homeschools their children. The Christian faith has always been their foundation.

“I remember from a very early age my mother was the main source of my spiritual education. My father was a bit of an alcoholic,” Evanie said, adding that her mother would ask her and her siblings questions after a church service to help them grow in understanding.

Attending primarily the Assembly of God Church, she said they were never told Catholics “weren’t Christians,” but Catholicism wasn’t really mentioned, as there was only one Catholic church in town.

“All of my actions were guided by, ‘What does God want for my life?’ God has a plan for us. I want that — whatever that is. Through prayer and a lot of seeking, I know that I found it,” she said.

Trey, 34, was formed in the Southern Baptist tradition and began preaching while still in high school. He preached at a variety of denominations beyond Baptist, including Methodist, Assembly of God and Pentecostal. By 21, he was pastoring Evening Shade Southern Baptist Church.

To coincide with his schedule as a minister and seminary classes, Trey received training to become a barber, owning Trey’s Main Street Barber Shop in Waldron the past 14 years. More than just cutting hair, he gets to know his clients and makes house calls.

“I’ve really had an Andy Griffith show role in the community. I've coached T-ball, I’m on the city council in Waldron … I’ve been a pallbearer at funerals” for his barber clients, he said. “... You kind of get brought into a role in someone’s life where you may be one of the only constant points of interaction, especially when people get older, they kind of get shut in.”

In both cutting hair and preaching, it was simply “Being a part of people’s story. Just walking with people on their faith journey,” he said.

Though the Plummers never attended a Catholic Church prior to 2020, seeds of the faith had been planted for years. Cousins Mike and Laurie Richardson, godparents to their children, had converted to Catholicism years prior. Trey said conversations with them and a Catholic friend from high school answered many questions.

“I kind of got to this point where it was on the back burner; ‘At least some Catholics know what they believe, but they are a little kooky about stuff,’” Trey said he thought. For him, Catholics were “shrouded in mystery.”

In seminary classes, he discovered early Christianity, the Church fathers and early teachings about the Eucharist, along with writings by G. K. Chesterton and C.S. Lewis. This exposure to Catholicism was a “big a-ha moment,” Trey said.

“You would hear these sermons when I was a kid growing up — there were the apostles and then the church was underground until the Protestant Reformation with Martin Luther. What about all these holy people here?” he said. “I think I was kind of forced to look at some of those things the more I studied. At one point I accepted the authority of the Catholic Church because they put the New Testament together.”

For about three years, Evanie said they tried out several churches in the area.

“I wanted to be back in church, and it killed my soul that my kids were not attending on a weekly basis,” she said.

The couple sat down one morning and decided they needed to find a church home. Evanie suggested the Catholic Church.

“When I think of Catholicism, I think of quiet reverence. I knew that they wouldn’t pull my kids out away from me,” she said, explaining that in Protestant faiths, children generally go to classes or a youth service while adults attend the main service.

Trey said they attended the first Mass of 2020.

“It made sense,” Evanie said. “I love that the focus is on Jesus; not on music, not on preaching.”

But it was only the beginning of an unexpected journey. They got a copy of the Baltimore Catechism, reading through it and having hours-long discussions.

“I say we’re COVID Catholics because we didn’t get to do anything normally,” Trey said.

But it didn’t stop them from soaking up Church teaching as a family.

“Father Mike Schmitz, he brought us through COVID,” Evanie said of the popular speaker, author and podcaster based in Minnesota. “We wanted to keep learning when the Church closed down … The kids really liked listening to him because he’s younger. He really helped with answering some of those questions like ‘How to make a good confession’” and about the Catholic teachings on Mary.

“He said, ‘No you’re going to come,’” Trey said. “... Those were really sweet, special moments. The church was quiet, there was no music. It was almost like a low Mass. We loved it. It was such a quiet, spiritual time.”

The family joined the Church during Easter Vigil 2021 at St. Jude. Catherine Phillips, the diocesan respect life director and parishioner at Our Lady of the Assumption Church in Booneville, sponsored Trey and has become “a personal mentor to me,” he said.

Phillips said watching the family “seeking the fullness of faith” and living it out this past year has been beautiful.

“Just their zeal, their dedication, the vibrancy they bring to the parish community because you can just see their joy and how much love they have for the truths of our faith and the real presence of Christ in the Eucharist … is a beautiful witness for the whole community,” Phillips said.

The family’s centering point is the Eucharist. Josiah, their oldest, said, “You really feel like you really need Jesus to get you through the week. If something bad has happened, you know at the end of the week you can come and take Jesus. … It's a really amazing thing.”

Trey said Catholicism has opened his eyes to the reality of needing salvation every day and how there’s “freedom in the fence” of the sacraments that give order to a person’s life.

“The Real Presence is why I’m a convert. If you don’t believe in the Real Presence, then you might as well not be a Catholic. That’s the foundation of all our sacramental understanding,” he said. “In the Protestant traditions, it’s almost like the preaching of the Word, the teaching of Scripture almost becomes sacramental in a way. But as Catholics, we get to feed on the Word. The word is incarnate. … Now he invites us to take him physically into us; what a mystery.”

Evanie said the Church’s liturgical calendar is the structure they’ve needed for their spirituality, and that “Jesus said come to me and here he is every week.”

For the Plummers, this Holy Week will be one of excitement, experiencing the week as full members of the Church, walking toward the light of Easter.

“Something that really touches my heart is when we cover the images on Friday. I walk in there, and it just hits me and it’s very solemn, it’s very sad,” Evanie said. “Then you come in on (Easter) Sunday and everything is back. We are there with Jesus and the Mass is back to normal. It's that dramatic shift. It’s almost like you feel how the disciples must have felt, how Mary must have felt — Jesus said what would happen and it did, and it’s beautiful.”