Giving thanks after Papal visit to Malta

Pope thanks Our Lady for Apostolic Journey to Malta

On the morning after his visit to Malta, Pope Francis prays for a moment at the feet of the ancient Roman icon of Maria Salus Populi Romani to express his gratitude to Our Lady for her maternal protection.

The Pope’s visit to the Basilica of St. Mary Major has once again acted as the two bookends of his Apostolic Journey, which this time took him to the EU nation of Malta for two days over the weekend.

According to the Holy See Press Office, Pope Francis traveled across Rome on Monday for a stop at the Papal Basilica to pray before the icon of Maria Salus Populi Romani.

The Pope laid a bouquet of flowers on the altar below Our Lady’s icon in the Borghese Chapel, and thanked the Blessed Virgin Mary for her maternal protection during his visit to Malta.

He then returned by car to his home at the Vatican’s Casa Santa Marta. 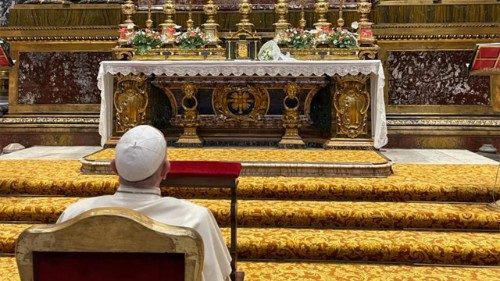 Pope Francis entrusts Apostolic Journey to Malta to Our Lady

Tradition has it that the icon of Mary “Salvation of the Roman Peoples” arrived in Rome during the reign of Pope St. Gregory the Great, sometime around 590 AD, though its origins date back much further.

Pope Gregory XVI crowned the icon in 1838, while Pope Pius XII repeated the gesture of devotion during the Marian year of 1954.

The Vatican Museums cleaned and restored the ancient icon of Maria Salus Populi Romani in 2018.

Pope Francis spent Saturday and Sunday in the Mediterranean nation of Malta for a visit which was twice delayed due to Covid-19 restrictions.

Migration and war, in a way, were at the center of the Pope's Apostolic Journey. The theme for the visit was "They showed us unusual kindness", and the Holy Father spoke frequently about the need for nations to welcome, protect, promote, and integrate migrants.

At his first event, with civil authorities, Pope Francis called for solidarity toward people on the move, and his last event lauded a concrete example of what he meant, when he visited the "John XXIII Peace Lab" migrant center in Hal Far.

On the other hand, the Pope spoke forcefully against war, calling it “sacrilegious”. Speaking to reporters on the return flight to Rome, he lamented the “pattern of war” which leads governments to spend money on weapons and disregard the sacredness of human life, even of the young.

Pope Francis' final public words during his Apostolic Journey to Malta were ones filled with pain:

“I am grieved. We never learn. May the Lord have mercy on us, on all of us. Every one of us is guilty!

Posted by Deacon Mike Talbot at 9:45 AM