Bishops across the world warn Germany's bishops of schism 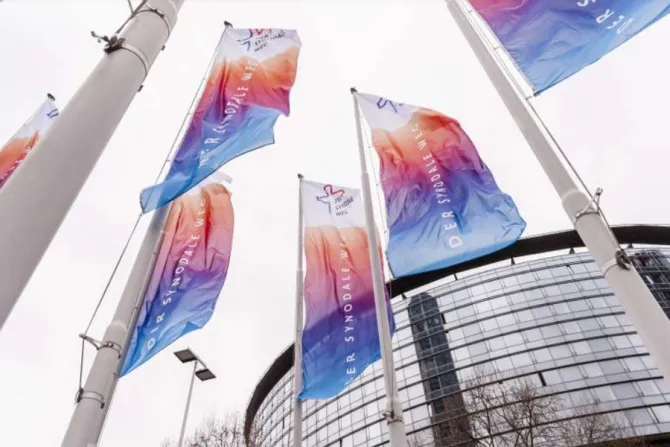 More than 70 bishops from around the world have released a "fraternal open letter" to Germany's bishops warning that sweeping changes to Church teaching advocated by the ongoing process known as the "Synodal Path" may lead to schism.

The letter expresses "our growing concern about the nature of the entire German 'Synodal Path,'" which the signatories say has led to confusion about Church teaching and appears focused more on man's will than God's.

“Failing to listen to the Holy Spirit and the Gospel, the Synodal Path’s actions undermine the credibility of Church authority, including that of Pope Francis; Christian anthropology and sexual morality; and the reliability of Scripture,” the letter states.

“While they display a patina of religious ideas and vocabulary, the German Synodal Path documents seem largely inspired not by Scripture and Tradition — which, for the Second Vatican Council, are ‘a single sacred deposit of the Word of God’ — but by sociological analysis and contemporary political, including gender, ideologies,” the letter continues.

The letter was released Tuesday. Its initial signatories included 49 bishops from the United States. Another 19 are from Africa, 14 of whom are from Tanzania. The letter's organizers provided an email address — episcopimundi2022@gmail.com — that other bishops can use to add their names to the document.

Those lending their names to the document include such well-known prelates as Cardinal Raymond Burke, Cardinal George Pell, Archbishop Salvatore Cordileone of San Francisco, and Archbishop Samuel Aquila of Denver.

Aquila released his own 15-page commentary in May on the Synodal Path's first text, saying it puts forward "untenable" proposals for changes to Church teaching. "The German bishops are sowing confusion for the entire Church and this should worry every bishop," he said in a statement regarding the bishops' letter.

Another prelate who signed the letter, Bishop Thomas Paprocki of Springfield, Illinois, released the following statement: “The German Synodal Way has strayed far from the path of authentic synodality and has placed itself in opposition to the truths of our Catholic faith as taught over the centuries from Scripture and Tradition. In fraternal correction and in union with bishops from around the world, I encourage the Bishops of Germany to return to the true deposit of faith as handed on to us by Jesus Christ.”

The president of Poland’s Catholic bishops’ conference and the Nordic bishops have expressed similar concerns. The latter group issued an open letter cautioning against what it called a “capitulation to the Zeitgeist” and an “impoverishment of the content of our faith."

The Synodal Way is a controversial multi-year process bringing together Germany’s bishops and laypeople to discuss the way power is exercised in the Church, sexual morality, the priesthood, and the role of women.

The Synodal Assembly consists of the bishops, 69 members of the powerful lay Central Committee of German Catholics (ZdK), and representatives of other parts of the German Church.

In February, the assembly voted in favor of draft texts calling for same-sex blessings and changes to the Catechism of the Catholic Church on homosexuality.

More recently, in an interview published on March 31, German Cardinal Reinhard Marx asserted that the Catechism’s teaching on homosexuality is “not set in stone” and “one is also allowed to doubt what it says.”

The 859-word letter doesn't cite any specific changes to Church teaching called for so far.

Instead, it broadly criticizes the Synodal Path's approach and the content of its draft documents. "A telling flaw" about these texts, the letter argues, is that rather than expressing the "joy of the Gospel," they bear the "obsessively critical, and inward-looking" marks of a bureaucratic process chiefly focused on something other than the salvation of souls.

"In its effect," the letter observes, "the Synodal Path displays more submission and obedience to the world and ideologies than to Jesus Christ as Lord and Savior."

Noting that authentic freedom is not the same as "autonomy," and that one's conscience does not determine truth, the letter argues that the Synodal Path has veered from the reality that a "properly formed Christian conscience remains subject to the truth about human nature and the norms of righteous living revealed by God and taught by Christ's Church."

In the same vein, regarding questions about the governance of the institutional Church, the letter urges the German bishops to remember that "[t]he reform of structures is not at all the same thing as the conversion of hearts."

While acknowledging that the "impulse" to reform and renew the Church "is admirable and should never be feared," the letter notes that "Christian history is littered with well-intended efforts that lost their grounding in the Word of God, in a faithful encounter with Jesus Christ, in a true listening to the Holy Spirit, and in the submission of our wills to the will of the Father."

"Because they failed to heed the words of Jesus, 'Apart from me you can do nothing' (Jn 15: 5), they were fruitless and damaged both the unity and the evangelical vitality of the Church,” the letter says.